The Story of Zahra

The Story of Zahra [Hikayat Zahra] (Quartet Books, 1986)
by Hanan al-Shaykh (translated from the Arabic by Peter Ford "with the author's cooperation")
Lebanon, 1980

"We had grown used to the idea of a cease-fire at the beginning. We did not dare to think or believe that fighting meant war any more than a cease-fire meant peace." (The Story of Zahra, 106)

I'm not sure why exactly, but I'd half expected that I wasn't going to like this work very much. I was wrong. Oft cited as a classic of contemporary Arabic literature and an important work in international women's studies courses, Zahra pursues its troubled, mentally-disturbed title character from a dysfunctional home in southern Lebanon, on to Africa for a failed marriage, and back to Beirut where she suffers through the ravages of the Lebanese Civil War. Multiple narrators close to Zahra recount their interactions with the character, and Zahra herself bookends the accounts with her own pre-war memories of electroshock therapy and a harrowing account of her wartime "romance" with a rooftop sniper. While al-Shaykh does a tremendous job at bringing the horrors of war home with descriptions of the daily bombings in Beirut, she's equally adept at evoking the profound sense of interior trauma suffered by Zahra (note: I loved the fragmentary nature of the narrative--both the multiple points of view and Zahra's own instability as a witness--for reinforcing these feelings of disconnect). Throughout, one senses that the real horrors for the character aren't the war itself but rather the non-war sources of her own feelings of displacement and exile: the undiagnosed mental health issues that plague her, various abuses at the hands of men, her complicated responses to her own sexuality, and her role as an individual suffering within the stifling, patriarchal culture in which she was raised. That being said, for all the things I admired about the work, for all the interesting things it has to say about colonialism, gender relations and the like, the one thing I didn't care for was a rather big one: the ending. In fact, I'd probably have to read it again before deciding whether it was overly simplistic from a thematic standpoint or an unavoidably logical conclusion to everything that came before it. Bummer. (Quartet Books, London) 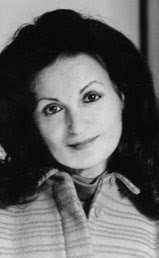 The Story of Zahra was self-published when it first came out because it was deemed too hot to handle by regional publishers. For a recent newspaper piece from Hanan al-Shaykh on her mother's life,

see "I Am Too Young to Marry" from The Guardian UK here.

This is my fifth book read for this year's Orbis Terrarum Challenge.
Next up: W.G. Sebald's Austerlitz (Germany), Mario Vargas Llosa's La guerra del fin del mundo [The War of the End of the World], or ??? (???).

Another perspective: E.L. Fay (This Book and I Could Be Friends)