A Good Man Is Hard to Find and Other Stories 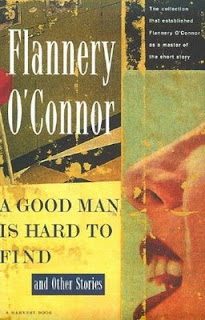 A Good Man Is Hard to Find and Other Stories (Harvest, no date)
by Flannery O'Connor
USA, 1955

Since I don't think I'd even thought of Flannery O'Connor since my high school days (note: in geological time, comparing the here and now to my high school days is a little bit like comparing the here and now to the Pleistocene Epoch!), I'd like to start off by giving Emily a great big thanks for putting O'Connor back on my reading radar/map with this review of A Good Man Is Hard to Find last July.  That being said, it's tough to know where to begin with this one.  While I enjoyed all ten of the short stories that comprise the collection, O'Connor's conception of the Christian South as a cracker heaven and hell was decidedly unpleasant for me at times: even without the title tale's serial killer, for example, her characters indulge in so much petty meanness and casual racism that it's easy to imagine a 2010 version of the volume being entirely populated by bathtub meth dealers in mullets.  I don't know enough about O'Connor to hazard a guess as to whether she meant this series of dysfunctional family portraits to serve as a metaphor for the South or as a reminder of the need for God's grace (the stated purpose of all her writing per the blurb on the back of the book) or what, but there are at least three things about O'Connor's writing here that I found totally arresting.  First, she's absolutely unflinching as an observer.  Of course, this is very much a pro that comes with some built-in cons: if you're at all uneasy with the use of the term nigger, for example, don't expect O'Connor to make you feel any less queasy about it.  Second, she's rarely predictable as a storyteller.  While I'd feared that she might be a little didactic when writing about the nature of grace and redemption, O'Connor was ballsy and unconventional enough to--as Emily points out--suggest that a four year-old boy in the river actually might be closer to God while drowning than back safe at home with his abusive parents.  Strong stuff, and not exactly what I expected from a wordsmith with a "religious" point of view.  Finally, O'Connor's a consummate craftsman in the sense that both the unexpected physical descriptions (the young woman in slacks "whose face was as broad and innocent as a cabbage" [1]) and the devastatingly casual nods to race relations in the '50s South ("Her Negroes were as destructive and impersonal as the nut grass," she writes of one character [136]) constantly keep you on your toes as a reader.  Can't say that I've found my new favorite writer or anything like that--but another misfit for the gallery is always, uh, nice.  (http://www.harcourtbooks.com/) 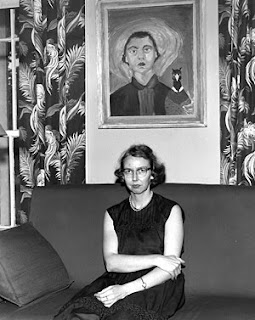 Flannery O'Connor
Up for Grabs:
Interested in reading A Good Man Is Hard to Find?  My "gently used" copy is up for grabs to the first person who asks for it in the comments box (U.S. addresses only, sorry rest of the world).
Publicadas por Richard a la/s 00:47