Our Horses in Egypt 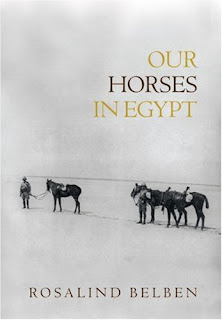 
To Burdock, cogitating, it seemed that horses appreciated scenery.  Burdock felt sorry that they what had fallen had missed the flowering.  Mighty sorry.  With the flowering had come sand flies.  Despite privation, sand-flies, wounds and the dying, were it nice for an animal to be alive?  Nicer than never to live at all?
Burdock didn't know.
***
Throughout the afternoon, in a narrow defile, Philomena hung her head.
The rain had stopped and a rainbow stood in the sky.
Led horses were being shelled elsewhere, and going down in a dreadful tangle and panic.  Their vital spark was vanquished in the ubiquitous puffs of smoke.  Here all was peaceful.
Before he was killed Sage had seen her easy and had waited--humble--for that droopy lip and the closeness of nostril and breath that would have told him that his rubbing her down with his fingers gratified her.
Philomena never did reward him.
His teeth had been chattering.
(Our Horses in Egypt, 122 and 180)﻿
At the risk of making Our Horses in Egypt sound something like a highbrow Watership Down (which it isn't!),  I think the easiest way for me to go about describing it is to start by saying that most of the 2007 James Tait Black Memorial Prize for Fiction award winner takes place on two different temporal planes and as seen through the eyes of two different species.  In the novel's present, moneyed war widow Griselda Romney sets out from England to Egypt in 1921 to see if she can discover what has become of the lone surviving family horse that was requisitioned by the British army for service in World War I.  In the novel's recent past, Romney's light brown mare, Philomena, witnesses the carnage and suffering of world war in the Middle East from her four-legged vantage point as a non-human participant in the action in Egypt and Palestine.  Near the end of the novel, there's an intersection of the two planes that, while anticipated, was so finely wrought as to leave this misanthrope-in-the-making feeling devastated.  As befits what's both an unusually told and an unusually moving narrative, though, I have unusually mixed feelings regarding Our Horses in Egypt on the whole.  On the one hand, I loved Belben's clipped, vaguely Woolfian storytelling style and the startlingly impersonal POV which would bracingly move from man to beast and back again with nary a slip-up to be found.  On the other hand, I positively hated spending time with many of her upper crust human protagonists--petty, high maintenance whiners for the most part--and was almost equally aggravated by her often arbitrary use of italics.  Too gimmicky, my dear!  While I can think of all sorts of possible reasons for Belben to have portrayed her lead human characters as such annoying creatures as she did, the fact remains that I distinctly would have preferred more of the fine writing on the horses and the unspeakable wartime horrors that they and their revolving door stable of unfortunate riders endured instead.  In short, a powerful but a far from perfect tale.  (http://www.randomhouse.co.uk/)
﻿

﻿Rosalind Belben
Our Horses in Egypt was the Wolves' book of the month for February 2011 (delayed one weekend).  Here are some other opinions on it for your reading enjoyment:
Emily (Evening All Afternoon)
Gavin (Page247)
Sarah (what we have here is a failure to communicate)
Publicadas por Richard a la/s 20:02