The Battle of Chile 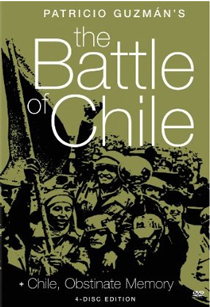 All too aware that many of my fellow bloggers would much rather hype multiple shitty film adaptations of 19th and 20th century British novels than talk about any documentary on a Latin American topic, I'd still like to spend a few moments here today in honor of Patricio Guzmán's nearly four and a half hour long The Battle of Chile (note: this expansive four-DVD set also includes a separate disc dedicated to Guzmán's hour-long 1997 doc Chile, Obstinate Memory, a powerful look at memory in that country some 25 years after the events depicted in this, his signature work).  Whether you share Guzmán's obvious pro-Allende sympathies or not, this remarkable film--shot in democratic Chile in the year leading up to the Pinochet coup on September 11, 1973 and finished in exile abroad after the director had to flee the country for his own safety--offers up a startling look at a country on the brink of civil war.  The footage is fantastic, the images often wrenching.  In part one's "The Insurrection of the Bourgeoisie," for example, an hour and a half of man and woman on the street interviews about the paralyzing food shortages, the labor and transit strikes, and the massive demonstrations for and against the socialist Allende concludes with the unforgettable scene of an Argentinean cameraman inadvertently filming his own death--shot to death on camera, cowardly and with deliberation, by a Chilean army officer participating in a preliminary coup attempt against Allende in late June. In part two's "The Coup d'État," the democratically-elected president Allende is literally bombed out of office with the military's treasonous daytime attack on the presidential palace in the heart of Santiago.  Part three's "The Power of the People," while perhaps lacking a single visual image quite as powerful as those that close the preceding segments, compensates by focusing on the mass rallies bringing hundreds of thousands of Allende supporters to the streets and the behind the scenes strategy debates of those on the left intent on bringing Allende's workers' revolution to the masses. While long and occasionally repetitive in its depiction of the strife that was tearing Chile apart, The Battle of Chile struck me as a raw but staggering achievement in its framing of a situation in which people from both sides were openly confiding that a civil war would likely be the only way to resolve the political stalemate.  Riveting.  (http://www.icarusfilms.com/) 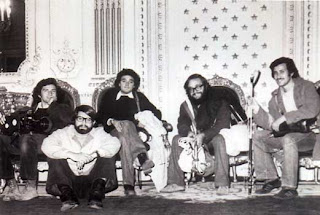 The Battle of Chile's crew (from left to right): Jorge Müller Silva (director of photography), Patricio Guzmán (director), Federico Elton (production manager), José Bartolomé (assistant director), Bernardo Menz (sound).
In the 1996 novel Distant Star, which alludes to Chile's transition from the troubled democratic state of Allende to the murderous sponsor of state terrorism it became under Pinochet, one of Roberto Bolaño's characters opines that "it seems to me that we are entering into the world championship of ugliness and brutality" ("me parece que estamos entrando en el campeonato mundial de la fealdad y la brutalidad").  Lending a real-life exclamation point to this fictional pronouncement, I feel it important to note that The Battle of Chile cameraman Jorge Müller pictured above was eventually detained and then "disappeared" by the military junta led by Pinochet and supported by the Nixon White House.  RIP.
Publicadas por Richard a la/s 10:34