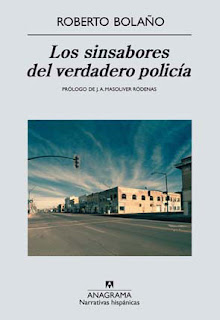 Los sinsabores del verdadero policía [The Troubles of the Real Police Officer], the latest posthumous release from the man who's rapidly becoming literature's answer to Tupac with a seemingly neverending series of new releases from beyond the grave, is more or less a complete failure as a novel: aimless, out of focus, obscure to the nth degree.  However, as a collection of rough drafts (which it essentially is) and/or a series of outtakes from 2666 (which it often resembles), it's juicy enough that I excitedly tore through it in the course of a few days last week.  While the skeletal outline of a plot mostly concerns the epistolary relationship between Chilean professor Oscar Amalfitano and Barcelona poet Joan Padillla, former lovers who now carry on a transatlantic correspondence about the novel that the latter is writing called El dios de los homosexuales [The God of the Homosexuals] and the city of Santa Teresa in which Amalfitano and his daughter Rosa now find themselves surrounded by killers, most of what got me geeked up here simply had to do either with the flashes of brilliance of the prose or the new or alternate background info on various 2666 characters.  Whether that will be enough to satisfy first-time Bolaño readers is kind of tough to say, but I have a feeling that most hardcore Bolaño veterans will appreciate learning more about what Amalfitano taught his students ["Que la principal enseñanza de la literatura era la valentía, una valentía rara, como un pozo de piedra en medio de un paisaje lacustre, una valentía semejante a un torbellino y a un espejo.  Que no era más cómodo leer que escribir.  Que leyendo se aprendía a dudar y a recordar.  Que la memoria era el amor"/"That what literature principally taught was courage, a strange courage, like a stone well in the middle of swampland, a courage similar to a whirlwind and a mirror.  That it wasn't more comfortable to read than to write.  That by reading, one learned to doubt and to remember.  That memory was love" [146]), what kind of friendships J.M.G. Arcimboldi (without the "h" and recast here as a French rather than a German author) maintained with other writers ("Raymond Queneau, al que consideraba su maestro y con el que se peleó en más de diez ocasiones.  Cinco por carta, cuatro por teléfono y dos persona a persona, la primera con insultos y maldiciones, la segunda con miradas y gestos de desprecio"/"Raymond Queneau, whom he considered his master and with whom he had quarreled on more than ten occasions.  Five by letter, four by telephone, and two face to face, the first time with curses and insults and the second with disdainful looks and gestures" [217]), and things of that nature.  Includes several techniques (e.g. fake bibliographies, encyclopedia style entries) and extended passages (e.g. a satirical discourse on the "heterosexuality" of the novel vs. the "homosexuality" of poetry) that are more fully developed in Nazi Literature in the Americas and The Savage Detectives but still enjoyable in the manner of an album full of B-sides by one of your favorite artists.  (www.anagrama-ed.es) 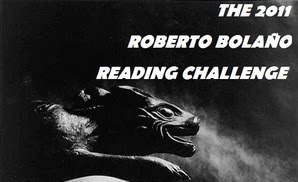 This was my second title read for The 2011 Roberto Bolaño Reading Challenge hosted by Rise of in lieu of a field guide.  For more on the novel in Spanish, check out the reviews by Martín of El pez volador here and by Lluís of lecturas errantes here.
Publicadas por Richard a la/s 16:37