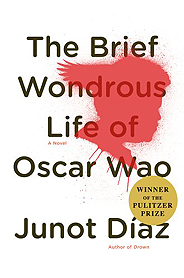 For a novel that falls a mere one annoying pussy reference short of qualifying as a fucking metal album or something, I eventually warmed to Junot Díaz's geek bildungsroman about sad sack Dominican-American virgin Oscar "Wao" Cabral even though its moronic side tended to bug me at times.  People who enjoy South Park may appreciate its bicultural literary equivalent more than I did.  The thing is funny after all, and I often laughed out loud at its ruthless depiction of college life, the various potshots ("He was a true gangster, gully to the bone, lived the life all those phony rap acts can only rhyme about" [122]), the wacky footnotes, and the Machado de Assis style interactions with the reader ("A Note from Your Author," on page 284, begins as follows: "I know what Negroes are going to say.  Look, he's writing Suburban Tropical now.  A puta and she's not an underage snort-addicted mess?  Not believable.").  I also enjoyed its comically in your face treatment of the "ghetto nerd" immigrant experience, even though I think that some of the heavier flashbacks treating the trujillato in the DR were probably better evoked by Vargas Llosa in his distinctly non-funny The Feast of the Goat.  That being said, I ultimately walked away from my experience with this pop culture-obsessed dramedy housed within the worst cover art I've practically ever seen not entirely sure that this was a novel with soul so much as a slickly written attempt to masquerade as a novel with soul.  Am I thinking about these things too much?  Perhaps.  But Díaz doesn't help himself in this regard because, as effervescent as his use of language often is, he's just as often guilty of laying it on thick with a prefab creative writing instructor/über nerd cuteness that makes me doubt his intentions.  Worth reading, a diverting story to be sure, just far from a fave.  (http://www.riverheadbooks.com/) 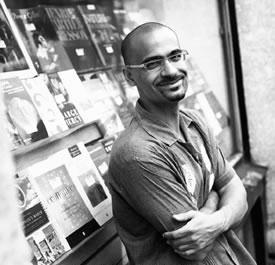 Junot Díaz
This was the Wolves' June book of the month as picked by Claire.  Please consider joining us during the last weekend in July for a group read of Orhan Pamuk's Snow, an E.L. Fay selection.

Other Opinions
Claire (kiss a cloud)
Emily (Evening All Afternoon)
Frances (Nonsuch Book)
Rise (in lieu of a field guide)﻿
Sarah (what we have here is a failure to communicate)
Publicadas por Richard a la/s 20:16