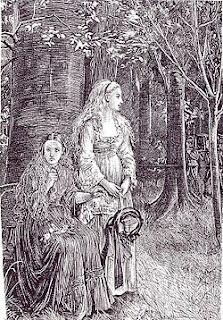 Since there's apparently no, ahem, lesbian vampire category for R.I.P. VI (tsk, tsk--let's hope that was just an oversight), I guess I'll have to count Carmilla as an ever so vague "horror" or "supernatural" entry for Carl V.'s reading event instead.  Which is just as well since the supposedly scandalous 1872 novella (first published in the magazine The Dark Blue, later included in Le Fanu's In a Glass Darkly, and here featured as part of a bonus booklet packaged with the 2008 Criterion Collection DVD of Carl Th. Dreyer's 1932 film, Vampyr, itself partially based on this and another Le Fanu tale) is sort of nondescript and more than a little plodding if truth be told.  That being said, Carmilla isn't exactly a total loss even though it certainly doesn't come anywhere close to living up to its shocking rep.  Would I read it again?  Probably not.  But the  representation of female/female sexuality must have been edgy for its times, and there's a nice narrative arc behind narrator Laura's early, conflicted reactions to Carmilla's attentions ("It was like the ardour of a lover; it embarrassed me; it was hateful and yet overpowering; and with gloating eyes she drew me to her, and her hot lips travelled along my cheeks in kisses; and she would whisper, almost in sobs, 'You are mine, you shall be mine, you and I are one forever'" [130]) and her growing appreciation for her attractive friend/predator as time goes on ("I am sure, Carmilla, you have been in love; that there is, at this moment, an affair of the heart going on," the teenaged Laura says at one moment.  To which Carmilla replies, "I have been in love with no one, and never shall, unless it should be with you."  The older Laura to the reader: "How beautiful she looked in the moonlight!"  [144]).  In addition, I also got a kick out of a couple of humorous horror tropes like the one where Laura's participation in the "sweet singing" of a funeral hymn (132) prompts the title character to ask, "Don't you perceive how discordant that is?" Apart from that, though, I don't have much else to say other than that Théophile Gautier's 1836 "La Morte amoureuse," Dreyer's 1932 Vampyr, and Alejandra Pizarnik's stupendously gory 1965 "La condesa sangriente"  (all posted on here in 2009, a banner year for the undead it would seem!) all deliver the carnal bite sorely lacking in Le Fanu's surprisingly timid "classic."  (http://www.criterion.com/)

Joseph Sheridan Le Fanu
(image at top: Funeral, by Michael Fitzgerald, from the original publication of Carmilla in The Dark Blue)
Publicadas por Richard a la/s 23:59