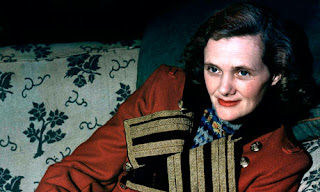 "Monte Verità" & "Don't Look Now"
by Daphne du Maurier
England, 1952 and 1971
I love that Daphne du Maurier photo up above.  Despite the weird Project Runway fashion statement that she's making with her ensemble, there's something about her expression that makes me feel that I could bond with her--or, more realistically, that makes me feel that I'd at least want to bond with her--should our two worlds ever meet.  Unfortunately, my first two reading dates with Daphne didn't go as swimmingly as I would have hoped.  For starters, experiencing "Don't Look Now," the 1971 short story of hers which I read first, was a little like watching a cool, edgy Hitchcock thriller for about an hour and a half and then finding out that M. Night Shyamalan had been brought in for the last 15 minutes to deliver one of those lame-o, implausible endings that he's famous for.  What the hell, girl and/or "M"?  You had me with the creepy old clairvoyant sisters and the sudden reappearance of the beloved but unfortunately long deceased young daughter.  You lost me with that ending--particularly the goofball last line which reads like a parody.  The 1952 "Monte Verità," at 79 pages maybe more a novella than a short story, was a disappointment for other reasons.  A genre splice pairing a mountain climbing adventure and a supernatural mystery focused on a mystical cult of true believers hidden away from the modern world, it all just got a little too H. Rider Haggard She outlandish for me although people more inclined to Brit adventure/supernatural mystery pastiches may naturally have a higher tolerance for this sort of thing.  Oddly enough given all this kvetching, though, I'm not at all opposed to seeking out a little more Daphne du Maurier action in the future.  If reading her at long last was kind of like being set up on a blind date with a hipster chick and then finding out that the hipster chick in question was not only inexplicably all bent out of shape about R.E.M. breaking up but also wrongly excited about Sting's Back to Bass solo tour, I still think she's a fine stylist in terms of her storytelling mechanics, in drawing attention to the emotional nuances of (and between) her characters, and--despite apparent disagreements with her judgement from time to time--also fairly good company in terms of how many of the supernatural aspects of these two stories are grounded in character reactions that feel realistic for the most part.  But R.E.M.?  Sting?  "Hipster"?  WTF?
Source
"Don't Look Now" and "Monte Verità" are the first and last stories featured in Daphne du Maurier's nine-tale Don't Look Now collection, read here as part of the "Peril of the Short Story" festivities for R.I.P. VI.  New York: NYRB Classics, 2008, 3-58 & 267-346.﻿
Publicadas por Richard a la/s 19:59