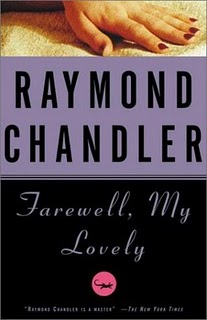 For anybody keeping score at home, I'm in the early stages of an ever so leisurely reread of all of Raymond Chandler's Philip Marlowe novels--looking for reading kicks, sure, but also looking to see how well these books hold up against my memories of them from days gone by.  So far Chandler and Marlowe are a solid two for two.  It's a measure of Farewell, My Lovely's success as an entertainment vehicle, though, that a far-fetched storytelling moment or two, an all too neat resolution of a love triangle and a murder, and some Hardy Boys-style credibility gaps didn't dim my enthusiasm for the novel as a whole.  It's a flawed but engaging work.  Although brash private detective Marlowe's first-person narration is as snappy as always ("Even on Central Avenue, not the quietest dressed street in the world, he looked about as conspicuous as a tarantula on a slice of angel food," he memorably describes one goon [4]), one of the things that I'd forgotten about in this novel is that he engages in an unexpected running gag involving some none too subtle Hemingway-bashing: "Who is this Hemingway person at all?" asks the dirty cop who's just had the Hemingway nickname bestowed on him by Marlowe and is quickly getting fed up with the mysterious insult.  "A guy that keeps saying the same thing over and over until you begin to believe it must be good," Marlowe retorts (164).  Elsewhere, Marlowe's reaction when presented with a photograph of a missing person is typical of the high testosterone yucks to be found throughout the narrative: "It was a blonde.  A blonde to make a bishop kick a hole in a stained glass window" [93]).  What makes this second Marlowe novel so fascinating from a thematic rather than a mere writing standpoint, though, is that Chandler took a genre tale of multiple murders in L.A. and boldly turned it into a kind of oblique commentary on the problems of race in big city America.  What was Chandler's message?  Thankfully, it's not so simple that I could tell you for sure.  However, in a novel where casual racism from white cops, criminals, and even Marlowe himself is often directed at "nigger[s]" (87), "Jap gardeners" (121), "a smelly Indian" (142) and the like, it's both uncomfortable and somehow bracing to see Marlowe's sarcastic indictment of the kind of justice available to blacks vs. whites: "Well, all he did was kill a Negro.  I guess that's only a misdemeanor" (118).  (www.weeklylizard.com) 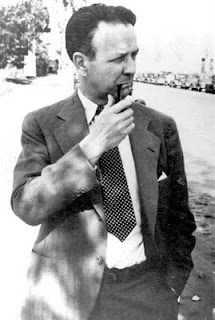 Raymond Chandler
Farewell, My Lovely was my third novel or novella read for R.I.P. VI.
The next title will likely be either James M. Cain's 1934 The Postman Always Rings Twice (also an old fave of mine back in my high school and/or college days) or a short story by Daphne du Maurier (since I appear to be the only guy on the planet who's never read anything by her).
Publicadas por Richard a la/s 19:09