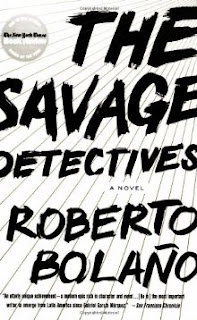 There's still plenty of time left before 2012, of course, but what the hell: to help put an exclamation point on the end of the 2011 Roberto Bolaño Reading Challenge and to help usher in the new year in style, Rise of the Bolaño challenge and in lieu of a field guide and I will be hosting a group read of The Savage Detectives (original title: Los detectives salvajes) in January 2012.  For those not very familiar with the work, The Savage Detectives is the 1998 novel/pistol to the head of magical realism that provided the commercial and critical breakthrough to set the Chilean Bolaño on his path as the most important writer to come out of Latin America since Gabriel García Márquez.  Many Bolaño fans consider it Bolaño's best work--yes, even better than his posthumous, much more critically-lauded 2666--and while I won't get into that argument here, I can see why some people might feel that way given its livewire writing style, narrative experimentation, and scabrous humor.  In any event, I hope many of you will consider reading or rereading the novel with Rise and me in what will be the second time around for both of us and the first time I've picked up this personal favorite of mine since those wild and wooly pre-blogging "formative years" of yore--just let us know if you want to read along and then join us for discussion with participating fellow bloggers during the last weekend in January (Friday, 1/27 thru Sunday, 1/29) or thereabouts.  P.S. Emily, Frances, Nicole, Tom, others--always the charmer, I'm personally inviting you/calling you out to an under-600 pages de-humiliation party.  What do you say? 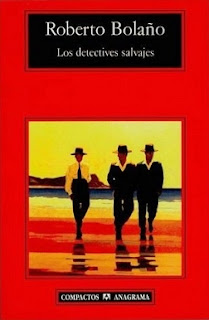 Savage (and non-savage) Readers
Rise of in lieu of a field guide
Amateur Reader (Tom) of Wuthering Expectations
Amy of The House of the Seven Tails
Anthony of Time's Flow Stemmed
Becky of Page Turners
Bellezza of Dolce Bellezza
Bettina of Liburuak
Caroline of Beauty Is a Sleeping Cat
Claire of kiss a cloud
Col of Col Reads
Emily of Evening All Afternoon
Frances of Nonsuch Book
Gavin of Page247
Jeremy of READIN
Mel u. of The Reading Life
Nicole of bibliographing
Sarah of A Rat in the Book Pile
Sarah of what we have here is a failure to communicate
Scott of seraillon
Séamus of Vapour Trails
Selena of luxe hours
Stu of Winstonsdad's Blog
Publicadas por Richard a la/s 10:33