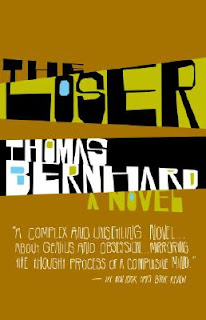 The Loser, the opening salvo in Bernhard's arts trilogy in which our cantankerous hero would later take aim at the theater (1984's Woodcutters) and painting (1985's Old Masters) in a sustained three-year broadside directed at creativity and the arts, is a spluttering 170-page rant about the despondency and envy felt by two childhood friends who are left scarred for life after having studied piano alongside the virtuoso Glenn Gould some twenty-eight years previously.  Fortunately, it isn't necessary to know anything about "The Goldberg Variations" or "The Art of the Fugue" to appreciate the unnamed narrator's own insult virtuosity: "What lousy teachers we had to put up with, teachers who screwed up our heads.  Art destroyers all of them, art liquidators, culture assassins, murderers of students" (18]).  Nor is it necessary to be a musician to appreciate the obsessive drive that separates the Glenn Gould types from the losers who are merely technically proficient: "The ideal piano player (he never said pianist!) is the one who wants to be the piano, and I say to myself every day when I wake up, I want to be the Steinway, not the person playing the Steinway, I want to be the Steinway itself...  All my life I have dreaded being ground to bits between Bach and Steinway and it requires the greatest effort on my part to escape this dread, he said.  My ideal would be, I would be the Steinway, I wouldn't need Glenn Gould, he said, I could, by being the Steinway, make Glenn Gould totally superfluous" (82, ellipses added).  Not bad, not bad at all as a sort of unforgiving excursus on madness and the quest for perfection--but at a grand total of four paragraphs in length, nowhere near as impeccably well-crafted and tight as the single-paragraph Wittgenstein's Nephew!  (Vintage International) 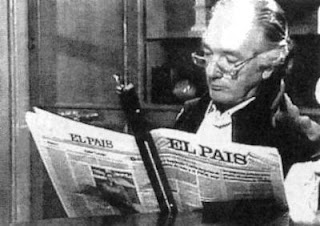