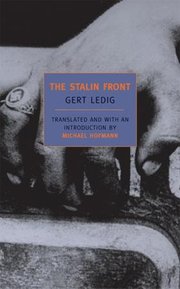 The Stalin Front [Die Stalinorgel] (NYRB Classics, 2004)
by Gert Ledig [translated from the German by Michael Hofmann]
Germany, 1955
﻿
This week I took some time off from War and Peace, a "war novel" that I've really been enjoying so far, to spend a couple of days with The Stalin Front, a war novel that I didn't really enjoy at all.  I don't blame that on Gert Ledig, though.  Since the army veteran's brooding, brutal work (originally titled Die Stalinorgel [The Stalin Organ] in honor of the German name for the Russian multiple rocket launcher known to the enemy troops as the Katyusha) primarily seems concerned with transmitting the message that war is hell to a postwar German audience that I'm guessing could hardly have had the time to forget about such a thing so soon, I think that any lack of enjoyment of the novel is probably proof that the writer succeeded all too well at what he'd intended.  In any event, fuck, how's one supposed to effectively evaluate the artistry of a work so unflinchingly dedicated to representing the carnage of war in such a graphic, almost pornographic fashion?  For whatever it's worth then, The Stalin Front, said to have been based on the novelist's own war experiences on the Eastern Front during World War II, takes place in a mercifully short span of time and pages as a small number of doomed German and Russian troops wait to square off against each other in a battle that doesn't seem to carry all that much strategic significance for either side.  Other than the fact that the characters' options seem to be limited to those of fighting down to the last bullet for no real purpose, fleeing, surrendering, taking their own lives, or unfairly taking a countryman's life to save their own, why do I say that the men are doomed?  Well, one of them, the Sergeant, after just having received instructions from the Captain, is introduced with the laconic aside: "He didn't realize he was simultaneously taking orders from fate" (2). Elsewhere, the Runner, who has unsuccessfully sought to escape the war after realizing how hopeless things are and wilfully disobeying orders that might see him punished by death, gasps in horror after accidentally knocking over a stack of corpses that have been used as a protective wall in a bunker.  "'Don't worry about it,' said the NCO.  'The Almighty must approve, do you think He'd allow it otherwise?'  He awkwardly lit a cigarette.  The 'Almighty' sounded unpleasantly cynical" (64).  Later in the novel, we are told that "the master of the hill was Death" (158).  I could go on, of course, but for better or for worse I've decided to spare you some of the more gruesome examples of Ledig's prose which would have made describing the work so much easier.  Suffice it to say instead that, on a surface level, the language itself is violent and choppy with short sentences that alternate between generating an aura of adrenaline and chaos and sucking all the air out of the room.  Par for the course for what was a powerful but often alienating read. 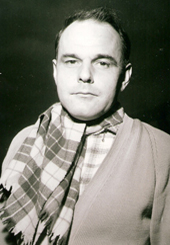 I read The Stalin Front, the November selection for Caroline's Literature and War Readalong 2012, both for that event and as part of my long-overdue participation in Caroline's and Lizzy's German Literature Month 2012.  I look forward to seeing what sort of reception this bleak and uncompromising novel receives from the other readalongers, and I'll link to Caroline's round-up post as soon as it becomes available (update: done!).  In the meantime, you can take a look at what Rise of in lieu of a field guide thought about the work when he reviewed it a full two years ago here.
Publicadas por Richard a la/s 00:23