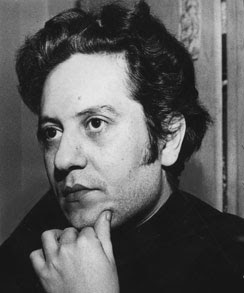 With the Argentinean Literature of Doom liturgical calendar year rapidly winding down to its increasingly alienating end, I thought I'd better stop putting off writing about Osvaldo Lamborghini--the unofficial dead calendar boy for the event and a "mysterious" figure who's at least somewhat famous in certain hobbyist circles for having made Roberto Bolaño deem his oeuvre "excruciating"--while I still have any readers left.  Of course, a post about Lamborghini's infamous 1969 short story "El Fiord" ["The Fiord"] just might take care of my "reader problem" for me for once and for all anyway.  You've been warned.  A mindbogglingly violent sado-masochistic allegory about the labor movement in Argentina in the late 1960s, "El Fiord" (sometimes referred to as a novel but here mercifully only about 15 pages in length) certainly lives up to its rep as an extremist's delight.  In point of fact, the work was supposedly considered so extreme in its time that its "distribution" was pretty much limited to behind the counter sales at a lone bookstore on the Avenida Corrientes in Buenos Aires and the sharing of mimeographed copies of the manuscript among Lamborghini's friends.  Since most of "El Fiord"'s more obscure political references are beyond me, how much of the piece's underground classic status is due to its stomach-turning qualities as opposed to its politics isn't quite clear to me.  However, César Aira, a longtime Lamborghini enthusiast who's been overseeing the posthumous publication of the writer's complete art terrorist works for the Editorial Sudamericana, has a perceptive comment about the specific avant-garde literary and political context of "El Fiord" in his compiler's note at the end of Lamborghini's Novelas y Cuentos I: "Si el comienzo de la literatura argentina fue El Matadero de Echeverría, el comienzo de su obra fue su propio 'Matadero'" ["If the beginning of Argentinean literature was Echeverria's 'El Matadero,' the beginning of Lamborghini's work was his own 'Matadero'"] (300).  A matadero, for those who don't know Spanish, is a slaughterhouse, and a slaughterhouse is exactly what "El Fiord" seems to want to replicate in terms of its vile assault on the senses.  To what end, I'm not sure.  However, to help explain the story's intrinsic gross-out wrongness, I should probably note that it begins with a character named Carla Greta Terón (supposedly a stand-in for former first lady Eva Perón) who is struggling to give birth to an "engendro remolón" ["stubborn monstrosity"] in a room full of hangers-on, onlookers, birds of prey, and cockroaches (9).  After an orgy of bloodshed (literally and figuratively) that gives new meaning to the measuring stick of "over the top," the piece ends at a political demonstration where flagpoles are planted into human bodies.  As you might suspect given "Evita"'s presence in the text, one of the other key characters is a man variously referred to as El Loco Rodríguez, "nuestro Patrón" ["our Master"] (11) and "nuestro abusivo Dueño y Señor" ["our abusive Lord and Savior"] (12-13): a malicious tip of the hat to President Juan Domingo Perón, who soon after he's introduced displays his abrasive love of country and lust for power by whipping Carla Greta Terón in the eyes as she tries to give birth and then sodomizing the narrator.  Later the "monstrosity" named Atilio Tancredo Vacán (possibly named in honor of labor leader Augusto Timoteo Vandor, a Perón opponent who was assassinated the same year "El Fiord" was published) is delivered among rivers of blood and shit and semen and vaginal fluids, and the rest of the story sees the characters subjected to beheadings, being burned alive, genital dismemberings (no pun intended), and the surrealistic like.  OK, I know, enough already, but Lamborghini is nothing if not consistent.  Sane readers may wonder at this point why anybody would want to read something like this or, even worse, why anybody would want to review something like this for an audience of practically zero. Good points! While I wouldn't presume to answer for you, I have to say that I personally was curious about the story's alleged artistry (Aira, I believe without joking, even refers to the "uniforme densidad poética del texto" ["uniform poetic density of the text"]) (301) and I wanted to see for myself why other admired writers like Fogwill speak so warmly about the assiduously repulsive Lamborghini.  Although I'm not really sure I found what I came for, I suppose I was impressed with the occasional striking image (the description of the nude Perón  gleaming with "un brillo de fraude y neón" or "a lustre of fraudulence and neon" caught my attention, for example [10]) and I did find what Bolaño found insofar as "El Fiord" seems like must reading for anybody who's serious about wanting to get his/her disgust on.  Plus I can now scratch another work off Ignacio Echevarría's list of the essential books in Spanish-language literature since the 1950s.  O happy day. 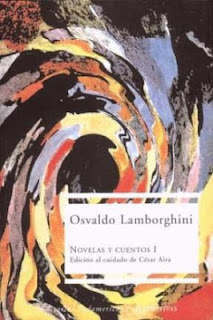