The Temple of the Golden Pavilion 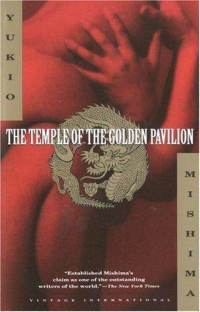 The Temple of the Golden Pavilion [Kinkakuji] (Vintage International, 1994)
by Yukio Mishima [translated from the Japanese by Ivan Morris]
Japan, 1956

Having had more than a few otherwise-reliable people I know of vouch for either the greatness of Mishima in general or--more to the point--the greatness of The Temple of the Golden Pavilion in particular, I'm sorry to say that this frequently snooze-inducing work of his left me with only one pressing question at the end: how could such a great novelist take up such crowd pleasing topics as nihilism and the nature of evil and make it all seem so fucking boring?  Probably more dull, heavyhanded, and overly mannered than bad per se, this fictionalized first-person account of the torching of a famous Buddhist temple in Kyoto in 1950 offers up some sporadically striking prose ("When I glanced at my shoulder, I saw that in the moonlight Father's hand had turned into that of a skeleton" [29]), some random weirdness (repeated references to a scene in which a woman squirts breast milk into a cup of her lover's tea), and some dialogue that could have been striking if it weren't so inauthentic as an example of spoken--as opposed to poetic--speech ("The world was immobile like a tombstone" [99]).  Given the imagery, might I have appreciated the novel a bit more had I embraced its "poetic" side and read it that way instead of trying to slog through it like a normal novel?  Yeah, maybe, but probably not enough to matter.  For, despite a multivalent narrative that can easily be read as both the confession of a madman and a brick through the window of Japanese culture during World War II and the immediate postwar era, teenage narrator Mizoguchi, a religious acolyte and morbid psychopath, is so drab, unconvincing, and underwhelming a creation that his criminal musings ("Is evil nevertheless possible?" he likes to ask himself [159]) and sexual confessions ("I wonder whether I shall be believed when I say that during these days the vision of fire inspired me with nothing less than carnal lust.  Yet was it not natural that, when my will to live depended entirely on fire, my lust, too, should have turned in that direction?" [220]) are more tiresome, banal, and at times ludicrous than anything else.  In other words, for a teen nihilist, a Japanese Johnny Rotten he ain't.  Whatever. 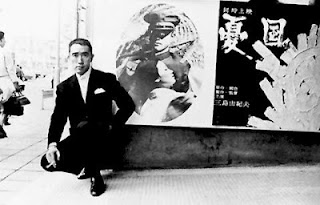 Mishima (1925-1970)
I read The Temple of the Golden Pavilion for Bellezza's Japanese Literature Challenge 6 and Tony's January in Japan. I hope that the surliness of my reaction to the novel won't be confused with my enthusiasm for those two events.﻿
Publicadas por Richard a la/s 01:25