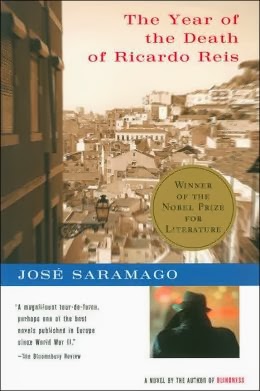 Having been persuaded in large part to add this 1984 novel to the 2014 Caravana de recuerdos Readalong list by other things that Miguel of St. Orberose has written about it in the past, I must admit I had a good, good laugh about an hour or two ago when I reread trickster Miguel's most recent comments on the work and saw that he'd called it not only Saramago's longest title "but also one that, uncharacteristically, has almost no plot."*  Man, does Miguel know how to help me pimp a group read title or what?  That being said, the novel's actually not all that long at all at somewhere around 300 pages and its fictional biography dedicated to a 1936 Portuguese "poet, doctor and monarchist" who "existed only as a figment of Fernando Pessoa's fanciful imagination" until Saramago came along sounds like a more than promising enough premise in exchange for a measly lack of plot.  In any event, if you care to join us for either the group read or just the discussion, please come back here and to the other participating blogs somewhere around March 29th through March 31st to follow the no-plot, run-on sentence hijinks (*note: Miguel, whose wide-ranging The Year of the Death of Ricardo Reis post can be found here, also claims that the book puts us "in the company of a master storyteller," but I'm pretty sure that was just a concession to entertainment-minded readers that needn't trouble a no-plot purist such as yourself).