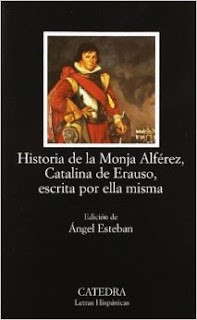 "History, his story or her story?" are just three of the gender-bending, cross-dressing angles to keep in mind whilst reading this alleged autobiography from 1626 [literally History of the Ensign Nun, Catalina de Erauso, as Written by Herself but Englishized under the much snappier title of Lieutenant Nun: Memoir of a Basque Transvestite in the New World], but critic Enrique Anderson Imbert offers up another intriguing one by suggesting that even if Catalina de Erauso's wild autobio were found to be authentic, "que no lo creemos" ["which we don't believe to be the case"], "habría que adelantar dos siglos el nacimiento de la novela en Hispanoamérica" ["one would still have to backdate the birth of the novel in Spanish America to a full two centuries earlier"] due to its fanciful blurring of the lines between fact and fiction as fellow critic Ángel Esteban explains it (12).  For our purposes, thankfully it's enough to limit ourselves to the general contours of a picaresque-like hi(s)tory in which the Basque hero/heroine runs away from her convent in Spain, chops off her hair and begins disguising herself as a man, finds his/her way over to the New World where he/she battles both the indigenous resistance and the Dutch navy in support of the King of Spain's dominions all while engaging in one murderous duel after another and narrowly escaping the double trouble of the gallows and almost being wed to multiple women as a reward for services rendered--all while maintaining his/her virginity intact!  To those troubled by my emphasis on gender dichotomies thus far, I confess that it's been difficult to man up to a situation in which the subjectivity of the early modern authorial "I" is so confused that the hero/heroine refers to himself/herself as masculine or feminine almost randomly throughout the text and even as both masculine and feminine on the very same page at one point (121); to those, on the other hand, really only interested in finding a recommendation for their next good story, it's perhaps worth noting that even after becoming a transatlantic celebrity, meeting the Pope and receiving permission to continuing dressing like a man, the easy to anger colors of our temperamental hero/heroine are revealed in a too good to be true finale in which two damsels meet "Señora Catalina" on the road from Rome to Naples and while laughing at him/her are rebuffed with threats of violence and an unmistakably choice "mannish" expletive: "Señoras p..." ["Whores!"] (175).  In other words, a winning introduction to a person Spaniard Ángel Esteban considers to be "una de las figuras más controvertidas y excepcionales de nuestro Siglo de Oro" ["one of the most controversial and exceptional figures of our Siglo de Oro"] (11). 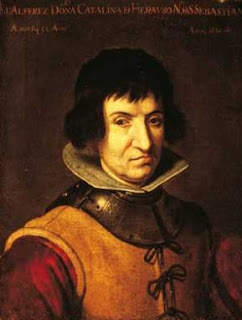