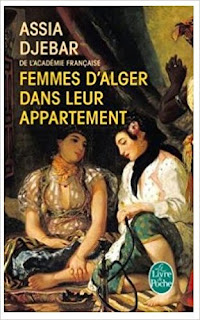 By far the best thing about Assia Djebar's provocative but maybe not always über-entertaining short story collection Femmes d'Alger dans leur appartement [Women of Algiers in Their Apartment] is the in your face afterword "Regard interdit, son coupé" ["Forbidden Gaze, Silenced Sound"] in which Djebar maintains that the 1834 Delacroix harem painting which provided the title for her book continues to fascinate us in part because it offers up "un regard volé" ["a stolen glance"] at what in reality is even today very much a "univers clos" ["closed universe"]: the cloistered world of Algerian women (241 & 243).  Like Tolstoy's historiographic essay at the end of War and Peace, Djebar's non-fiction commentary alludes to and amplifies many of the thematic concerns of the fictional world at hand.  In the novella-length title story, for example, Sarah, now a musicologist transcribing women's songs from bygone times but once locked up in the infamous Barberousse prison during the war for independence, recounts how she was "une prisonnière muette" ["a mute prisoner"] during most of her sentence--"un peu comme certaines femmes d'Alger aujourd'hui" ["a little like certain women in Algiers today"] who, through fear of social change or on account of their invisibility in the man's man's man's world of the dominant culture, remain locked up in prisons of their own (124).  In "Il n'y a pas d'exil" ["There Is No Exile"], on the other hand, Djebar suggests that it isn't just men who bear responsibility for the second class citizenship of Algerian women: "Une femme honorable ne travaille pas hors de sa maison" ["An honorable woman doesn't work outside the home"], one mother of a working daughter says--or at least used to say (148).  The reason for her change of tune?  At the time in which the story is set, the war against the French had created both a surplus of exiles and a shortage of men.  Women have to work if they wish to live or to live well.  Whatever the strengths of these individual stories on their literary merits or for their windows onto this so-called closed universe, though, it's that bottle-smashing, flamethrowing afterword that's put an exclamation point on my desire to read more of Djebar at some point.  In a span of just under 30 pages, the essayist revisits the three day long voyage en Orient to the recently conquered capital city that led Eugène Delacroix to conceive of the original Femmes d'Alger dans leur appartement prior to foregrounding the role of  Algerian women in the more recent past as the "porteuses de bombes" ["carriers of bombs"] at the Battle of Algiers (261).  In between, she notes that even as Algerian "nationalism" against "outsiders" has triumphed over the colonialists from time to time, "l'image de la femme n'est pas perçue autrement: par le père, par l'époux et, d'une façon plus trouble, par le frère et le fils" ["the image of women isn't perceived any differently: by fathers, by husbands, and in an even more troubling fashion, by brothers and sons"] (244).  Situated in something of an adversarial relationship with regard to both Algerian men and one of the three major languages of Algeria itself (note, the author tells us on p. 247, that the "dialectal" Arabic for the act signifying the casting off of the veil = "je ne sors plus protégée" + "je sors deshabillé ou même dénudée" ["I no longer go out protected" + "I go out undressed or even stripped bare," highlighted words italicized as in the original]), is it any wonder that Djebar would indict the silencing of women as a quasi-colonial "seconde mutilation" ["second mutilation"] or denounce the "parole déflorée, violentée" ["deflowered, violated word"] in acquiescence to a forced marriage as the dress rehearsal for "l'autre défloration, l'autre violence" ["the other deflowering, the other violence"] to follow (254)?  Wow, incendiary stuff.