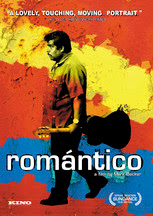 Superb documentary on Mexican musician Carmelo Muñiz Sánchez and his attempts to eke out a meager living playing for tips in the bars and restaurants of San Francisco's Mission District. Described as "a reverse immigration tale" by director Mark Becker, the film follows the then 57-year old Carmelo from the Bay Area back to Salvatierra, Guanajuato when he decides to return home after a three-year absence to reconnect with his dying mother. The attendant complications, both economic and emotional but often one and the same, are dealt with throughout with an understated touch; however, the manner in which many of the scenes are composed--in particular, one of Carmelo alone at the Zócalo in Mexico City and of another where he learns that visitors' visas to the U.S. are only available to those Mexicans who happen to be very wealthy--is haunting in intensity. Interspersed with wonderful music as uplifting as it melancholy. (http://www.kino.com/)


*For more on Romántico, play the trailer below*