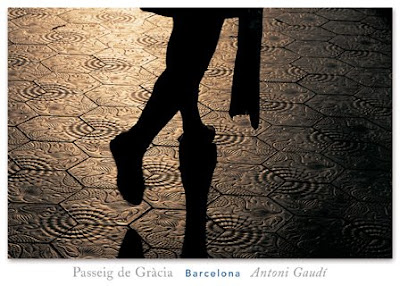 A BCN "Postal" I Really Like
I went to a great exhibit on "Barcelona and Modernity" at the Metropolitan Museum of Art in New York last year and finally picked up the hefty catalogue for the exhibition earlier this year. Since Barcelona is my favorite city anywhere in the world at the moment, this $65 (and nearly 65-pound!) tome on some of its marvels should provide lots of armchair entertainment while I pay down the credit cards enough to arrange another proper visit. For now, it'll have to do.

While reading Francesc Fontbona's contribution on "The Renaixença in Art" (see Fontbona, "Renaixença," in William H. Robinson, Jordi Falgàs, and Carmen Belen Lord, eds., Barcelona and Modernity: Picasso, Gaudí, Miró, Dalí, New Haven and London: Cleveland Museum of Art in Association with Yale University Press, 2006, 22-26), I decided that it might be fun to do an occasional series of postings inspired by the different catalogue chapters from time to time. We'll see where all this idea-stealing laziness eventually leads me, but in the meantime you've been warned: the "inspired by Barcelona and Modernity" blog mania begins here. 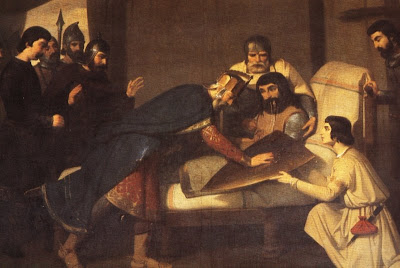 This canvas by Claudi Lorenzale i Sugrañes, referred to as The Origin of the Coat of Arms of the House of Barcelona in figure 1 of Fontbona's article, "shows the moment when, according to legend, Charles the Bald (Charles II of France) dipped his fingers into a bloody wound suffered by the Catalan count Wilfred the Hairy and drew them across the count's gold shield, thereby creating, so tradition has it, the national flag of Catalonia, which consists of four red bars on a yellow field" (Fontbona, 23). I had heard the story about the Catalan flag's origins before, but I wasn't aware of this particular painting about it until I came across it in the catalogue today. In his brief study (the first of two on the Catalan Renaixença in the work), Fontbona places it in its historic context in a way that should appeal to art lovers, to people interested in Catalan history, and--truth be told--to those who just feel like mentioning Wilfred the Hairy every once in a while. A great name like that should never go out of style!