Carmen Belen Lord on Modernisme in Barcelona and Sitges 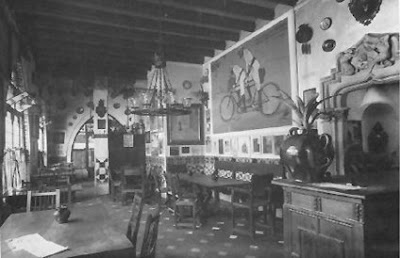 Interior of Els Quatre Gats, ca. 1899-1904
For my second post on the Barcelona and Modernity theme inspired by the catalogue of the same name, I'd like to move ahead to Carmen Belen Lord's submission on "The New Art: Modernisme," which can be found in William H. Robinson, Jordi Falgàs, and Carmen Belen Lord, eds., Barcelona and Modernity: Picasso, Gaudí, Miró, Dalí, New Haven and London: Cleveland Museum of Art in Association with Yale University Press, 2006, 34-41. Before taking a closer look at her study, I'll let Belen Lord get us started with her contextualization of Modernisme:

"Arising from the charged context of the Renaixença--the most illustrious revival of Catalan political identity and culture since the Middle Ages--and supported by the region's concurrent prosperity, Modernisme nonetheless rejected the general conservatism of the Renaixença as well as its Romantic concentration upon the historic past. Instead, its proponents sought to establish a visual language uniquely expressive of Catalan modernity, of the dynamic of the new, within Spain, which at the same time acknowledged the region's ancient traditions. It is this concept of innovation that unifies the divergent forms assumed by Modernisme, rather than any defined style" (Belen Lord, 34).

She then goes on to explain the role of the magazine L'Avenç (home of the first writers to coin the term Modernisme) and the 1888 Exposició Universal in forwarding Barcelona's modernist art and social agendas at the time. Noting the influence of Paris on many of BCN's artists and intellectuals, she also discusses how many of the latter city's artistic landmarks were created by those who had been influenced by time spent in France--citing the well-known example of Els Quatre Gats café, which was inspired by the City of Light's Chat Noir and quickly become ground zero for bohemian Barcelona. 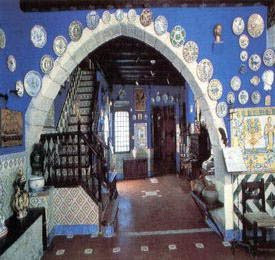 While much of this will undoubtedly be familiar to Modernisme freaks, I was surprised to learn that L'Avenç sponsored several Festes Modernistes in nearby Sitges between 1892 and 1899 that are now given credit for bringing wider popularity to the movement. In other words, Modernisme was BCN-centered but not exclusively so. In fact, painter Santiago Rusiñol, one of the biggest movers and shakers of the movement and also famous for being one of the four gats who founded the eponymous café, even created a new residence/studio in Sitges to house his collection of works made in iron. Built out of former fishermen's homes, the decidedly modernist Cau Ferrat (Den of Iron) now is a museum bearing the same name. 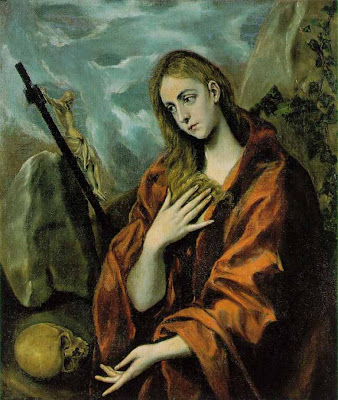 Interestingly given its avantguardista street cred, the Museu Cau Ferrat is also home to a couple of El Greco canvases including the beautiful one above. What did the old master have to do with Modernisme? Apparently Rusiñol bought two El Greco paintings in Paris, bringing them back to Sitges as one of the centerpieces of the third Festa Modernista in 1894. Belen Lord shares a wonderful anecdote about this, revealing that people tossed flower petals off the roofs during the procession from the train station to Cau Ferrat in celebration of their installation there. She also adds that Rusiñol felt that "El Greco provided an ideal role model for Modernistes because of his defiant individualism, unrestricted intellect, and cosmopolitanism" (Belen Lord, 39)--probably as good a place as any for me to end this post on Barcelona and modernity. Fins aviat.
Publicadas por Richard a la/s 21:21