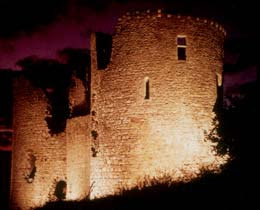 The Canso d'Antioca, composed by the Limousin miles Gregory of Bechada of the castle of Lastours sometime early in the 12th century, is an Occitan chronicle on the First Crusade that was once celebrated for its length and vigor. Sadly, what's left of the work now--a mere 19 laisses containing 714 lines of verse, themselves the victims of extensive remaniement according to Sweetenham and Paterson--can easily be read in the time it takes to wash and dry your clothes in a public laundromat. Hardly the stuff of epic legend!

If the Canso's almost complete disappearance over the course of the years was certainly unlucky from both cultural and linguistic points of view, we're very fortunate to have the remaining fragment--discovered at Roda in Aragón in the 19th century and now preserved in Madrid's Real Academia de la Historia --available in this English translation presented side by side with the old Occitan. Part chanson de geste/part historical narrative, the so-called "Madrid fragment" is a hybrid beast that seems to represent one of western Europe's earliest surviving attempts at vernacular historiography--and in poetry at that.

While the passages that are still extant are a little unimpressive from a purely literary standpoint (i.e. don't read them expecting a mini-Cantar de Mio Cid or a Chanson de Roland junior), the careful study that accompanies the translation helps make up for that by considering the fragment's textual history, the "vernacular epic tradition of the First Crusade," the poem's value as history, and the intersection between poetry and history in vernacular literature of the era. Heady stuff for those interested in medieval, Occitan or medieval Occitan letters and an impeccably-researched tribute to a poem almost lost in the mists of time.