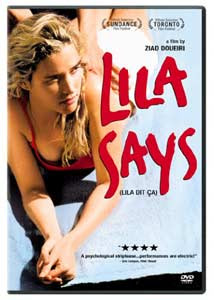 Lila dit ça (2005 DVD)
(Lila Says)
Directed by Ziad Doueiri
France, 2005
In French with English subtitles
Another solid flick from France. While the DVD cover made me worry that it might contain yet another cheesy teen love story, the movie itself is provocatively told and very well-acted by its two young leads (Vahina Giocante as the scandalous Lila, Mohammed Khouas as the shy Chimo). Set in a somewhat run down immigrant neighborhood in Marseille, the film uses this economically-depressed cultural backdrop to explore what happens when two worlds collide. Since what Lila says is almost always graphically sexual in nature, Chimo's character seems to take a long time trying to figure out whether Lila really likes him or is just putting him on or is a little off in the head--a state of confusion I found particularly believable. I also liked the subtle way in which the film touched on ethnic tensions, hinting both at Muslim suffering at the hands of the police and neighborhood intolerance of any outsiders who are different. The ending, with the brutal victimization of one character as the price of a ticket out for another, seemed a little too tidily wrapped up and telegraphed in advance for me, but feel free to let me know if you disagree. (http://www.sonypictures.com/)
Publicadas por Richard a la/s 21:25