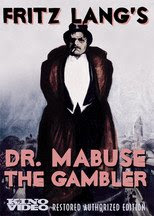 Fine, fine crime thriller frequently hailed as Germany's response to the Fantômas books and Feuillade serials. While a hefty four and a half hours of running time may necessitate that you devote a weekend to most leisurely submit to its decadent pleasures (the film, based on a pulp novel by Norbert Jacques, was initially released in two aptly-titled installments, Dr. Mabuse, the Great Gambler and Inferno: A Play of People of Our Time), the documentary-like portrayal of various cocaine-and-cards clubs and the usual expressionistic obsessions with things like mad doctors, mind control, and spiritualism make this totally worth it. Siegfried Kracauer's 1947 From Caligari to Hitler: A Psychological History of the German Film isn't alone in positing Mabuse as the type of tyrannical, Hitlerian übermensch that would foreshadow the true Evil to come, but Lang's vision of manipulated stock market crashes and world-weary aristocrats looking for shallow kicks ("Everything you see from a car or a theater box is ugly...or dull") does a superior job of capturing a Berlin hovering over the edge of the abyss even without that retrospective analytical baggage included. Featuring Rudolf Klein-Rogge as the power-mad archcriminal, Bernhard Goetzke as the dogged Prosecutor von Wenk, and Gertrude Welcker as aimless socialite Gräfin Dusy Told (my new silent movie girlfriend, at least for the day). (http://www.kino.com/) 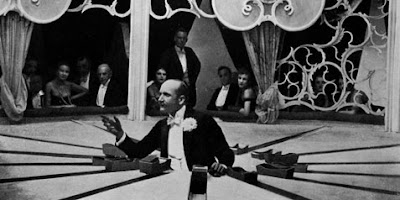