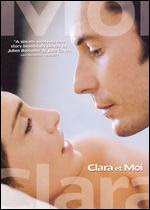 Julie Gayet is riveting (acting-wise and ooh la la-wise) as half of Clara et Moi's photogenic but troubled title couple, but I don't even want to think about what this slightly better than average love story would have been like without her star-in-the-making performance. An early silent movie style dialogue-free pick-up scene on the Paris Metro was an unexpectedly nice treat, for example, but other directorial risks like the musical interlude during the couple's first date were more on the not-so-great side if you ask moi. And despite a few good supporting actor turns elsewhere in the work, lead Julien Boisselier's somewhat milquetoasty Antoine didn't do much for me as the other half of the romantic equation in question--too bad my treatment for a film called Clara et R-Lo was rejected sight unseen by both the movie people and my wife. Merde! (http://www.lifesizeentertainment.com/)
Publicadas por Richard a la/s 23:19