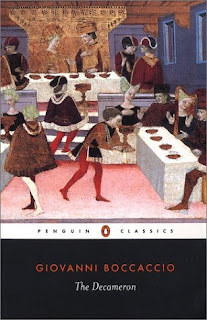 "No one will ever find out, and a sin that's hidden is half forgiven."  (The Decameron, 47)

I'd read the prologue and the "First Day"  from Boccaccio's Decameron (1353) before, but I read them again this week in preparation for this post.  A couple of things stood out.  First, like the unreliable narrator in Juan Ruiz' nearly contemporary Libro de Buen Amor (c. 1343), it's sometimes difficult to know when Boccaccio should be taken seriously and when he's just putting you on.  For all the talk about offering solace and instruction to his readers, for example, the Florentine lays his cad card on the table with nuggets like the following: "So in order that I may to some extent repair the omissions of Fortune, which (as we may see in the case of the more delicate sex) was always more sparing of support wherever natural strength was more deficient, I intend to provide succour and diversion for the ladies, but only for those who are in love, since the others can make do with their needles, their reels and their spindles" (3).  While this would appear to be the medieval equivalent of a frying pan joke, Boccaccio actually privileges women in terms of the composition of his cast.  "I shall narrate a hundred stories or fables or histories or whatever you choose to call them, recited in ten days by a worthy band of seven ladies and three young men, who assembled together during the plague which recently took such a heavy toll of life.  And I shall also include some songs, which these seven ladies sang for their mutual amusement" (3).  With zero background in the is he or isn't he a proto-feminist squabble, I look forward to evaluating Boccaccio's take on gender issues as I slowly make my way through The Decameron.  Secondly, whether Boccaccio's writing about the plague was based on his own eyewitness testimony or on the descriptions of others (translator G.H. McWilliam suggests it was the latter), it provides an extremely jarring backdrop for the storytelling sessions to come.  "It did not take the form it had assumed in the East," he writes on page 5, "where if anyone bled from the nose it was an obvious portent of certain death.  On the contrary, its earliest symptom, in men and women alike, was the appearance of certain swellings in the groin or the armpit, some of which were egg-shaped whilst others were roughly the size of the common apple."  Given this emphasis on the ravages of the Black Death in the "introduction" that precedes the storytelling marathon, the lighthearted nature of the first day's stories that follow provides quite the segueway.  A Jew who converts to Christianity despite the evil ways of the Pope and his clerics at Rome, a "money lender" who thinks his way out of a verbal trap laid for him by the sultan Saladin, and at least one abbot who likes the sexual position of woman on top star in the first series of ten stories about eloquence and ingenuity.  Will the horror of the plague and humor walk hand in hand throughout The Decameron or will the humor eventually win out?  I'm betting on the latter, but feel free to let me know what you think if you have a guess or an answer of your own.  In the meantime, I'm enjoying this mightily thus far!
Publicadas por Richard a la/s 18:12