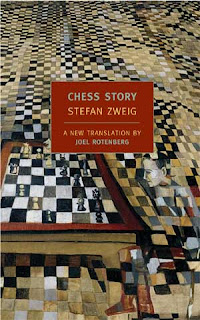 Before any of you out there rush to commend me for my rare fiscal restraint in borrowing a book from the library rather than just buying it as usual, please be advised that the unrestrained ugliness of the cover above likely had a tremendous amount to do with the decision (note to the NYRB Classics design team: in a week in which Frances the Book Temptress just posted on an exquisite series of new Nabokov cover art that has everybody and his brother drooling, "thanks" for leaving me holding the bag here with that "trippy" 1980s science fiction fanzine level shite of yours that mars an otherwise fine publication).  All grumbling about design matters aside, the content in Zweig's 84-page novella provided for an altogether ace introduction to this previously unread by me Austrian writer.  While the plot sounds rather inauspicious in terms of the excitement level to be expected--the passengers on board an NYC to Buenos Aires ocean liner discover that the world champion chess master Mirko Centovic is on board and challenge him to a couple of pay-for-play matches pitting the group of seemingly outmatched amateurs against the arrogant champion--the story's told with such first-person verve that I can understand why it's hard to avoid Zweig review sightings when trolling through the blogosphere.  Whether you enjoy the nervewracking battle of wills that ensues as straight entertainment or prefer one of the more allegorical readings of the chess story that I've seen (the bumbling passengers ineptly facing up to the rude, Hitlerian Centovic as WWII rages on in the background), you'll prob. be impressed with Zweig's deceptively simple prose and ability to ratchet up the emotional tension without Sigrid Undset-like histrionics.  For those of you already familiar with this author's work, perhaps one of you would be so good as to tell me whether I should read Beware of Pity or The Post-Office Girl next.  They're both now on "the list."  (http://www.nyrb.com/) 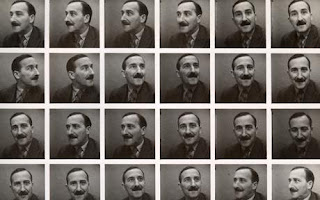 P.S. Although I intentionally left out "key information" about a major character in Chess Story above to try and preserve at least one element of surprise for new readers of the work, Zweig's own sad story deserves at least a footnote here: a refugee from the Nazi war machine, he fled Europe for South America before eventually killing himself in a suicide pact with his wife in Brazil in 1942.  The completed manuscript of Schachnovelle was found among his belongings at his death--apparently expressly intended for posthumous publication.