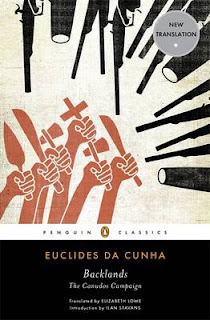 "We are condemned to civilization.  Either we progress ﻿or we will become extinct.  That much is certain."
(Euclides da Cunha, Backlands: The Canudos Campaign, 62)
As anyone who has seen Antônio Conselheiro's infamous death photo can attest, the apocalyptic firebrand and spiritual leader of the backlands rebellion didn't survive the final siege at Canudos.  But what inspired this itinerant ascetic to take on the Brazilian army?  And why was he so successful at rallying the poor and the criminal to his cause?  Euclides da Cunha's answers are fascinating both for their ambivalence and for what they tell us about the Brazil of his time.  Classifying Conselheiro as "a second-century heretic in the modern age" (143), the writer presents the urban/victors' side of the story by diagnosing the zealot as a religiously deranged product of his backlands environment.  "Antônio Conselheiro was a type of antihero whose sick mysticism was a compendium of all the superstitions and errors that have debased our nationality," he writes.  "He attracted the people of the backlands, not because he dominated them, but because their aberrations dominated him.  The environment worked in his favor, and he had a grasp of the practicality of the absurd.  He obeyed the irresistible finality of old ancestral impulses and while gripped by these impulses he had the outward appearance of a confident evangelist.  It was this confidence that disguised his insanity" (147).

Elsewhere, as in this opening salvo from a section titled Antônio Conselheiro: A Misfit Turns Back the Historical Clock, da Cunha is even stronger in his denunciation of Conselheiro as an atavistic lunatic:


It was not surprising that our deep ethnic strata pushed up ﻿the extraordinary figure of Antônio Conselheiro, "the Counselor."  He is like a fossil.  Just as the geologist can reconstruct the inclination and orientation of very old formations from truncated strata and build models of ancient mountains, so can the historian deduce something about the society that produced this man, who himself is of little worth.  Under normal circumstances, this man would have been diagnosed as a neurotic with progressive psychosis.  However, in his social context he becomes an alarming anomaly.  The stages of his career do not parallel a serious illness; however they do give us the profile of a grave social disorder.  This man was driven by forces larger than he was, to lead a conflict with an entire civilization and to go down in history when he should have gone to a mental hospital.  For the historian, however, he is not someone with mental illness; he represents the integration of various social traits, which would not be perceived had he remained anonymous, but were forceful and well defined when this man came to represent a social movement (124).
I've quoted this paragraph in its entirety because it says quite a bit about da Cunha's aims, biases, and methodology.  Note that he doesn't just dismiss Conselheiro as a madman--he argues that the Counselor represents a non-mainstream stratum of Brazilian society that's out of time with the present﻿.  While it's easy to take da Cunha to task today for his 19th-century, Sarmiento-like civilization and barbarism biases, dismissing those tendencies out of hand does a real disservice to the investigatory nature of his efforts.  Da Cunha seems to have seen the Canudos war as a horrific example of two worlds in collision, and his "scientific" attempt to understand both sides of the story is responsible for much of the moral tension that informs the work.  Reading him, I sometimes felt like I was in the presence of a Brazilian Thucydides.

To give you a better idea of what I mean, I'll close for now with a couple of examples of da Cunha at work late in Chapter II ("Man").  This part of the work is the anthropological and cultural set-up for the six chapters on the battle that will follow.  Da Cunha begins with a typical Euclidean assertion, bold and to the point: "We must insist on this truth: The war of Canudos was a regression in our history.  What we had before us was the unsolicited armed insurgence of an old, dead society, brought back to life by a madman.  We did not recognize this society; it was impossible for us to have known it" (168).  With one fell swoop, the author has stigmatized the backlanders as primitives in opposition to an army that represents the forces of republicanism and modernity.  It's a charge that will be repeated throughout the work, often with racist assumptions attached.  And yet just a single page later, da Cunha's ambivalence is revealed when he attacks the "greed" of the victorious army by contrasting it with the humble lifestyle of the vanquished--a people so poor that their defeat resulted in "one of the most unrewarding spoils of war in history" (169).  The prize spoils in the sacked settlement?  Scraps of paper recording the preaching of Antônio Conselheiro.  "These scraps were worth everything because they were worth nothing...and as one read them over, it was evident just how harmless his sermons really were: They simply reflected the poor man's confusion.  Every line was imbued with the same vague and incongruous religious doctrine.  There was very little of political significance to be found in any of them and nothing that would have supported his messianic cause" (169).  To top it all off, da Cunha even offers a totally unexpected apology for Conselheiro's actions: "If the rebel attacked the government, it was because he believed that the promised kingdom was near at hand" (169).  Suffice it to say that with perspectives like these, this isn't run of the mill history at all.

*****﻿
Given the gripping military narrative I plan to take a look at next, one of the great ironies of Backlands: The Canudos Campaign is that it was written by a pro-army but anti-war observer who felt conflicted about this clash between civilization and what he called "the Jerusalem of mud huts" (176).  Fast-forwarding to the violent end of the conflict from the relatively safe vantage point of Chapter II, da Cunha hints at and finally admits that Conselheiro's provocation "demanded another kind of a response" than the war that would wind up producing thousands of casualties: "Meanwhile we sent them guns and the final, incisive argument of the moralist--bullets" (172).  Gotta love this stuff! 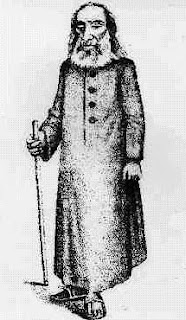 Antônio Conselheiro﻿:
"This man was driven by forces larger than he was, to lead a conflict with an entire civilization and to go down in history when he should have gone to a mental hospital."
﻿
Publicadas por Richard a la/s 00:16