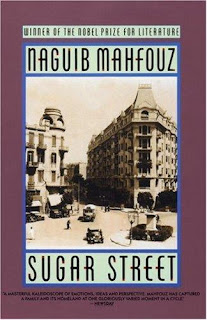 Although I certainly enjoyed most of The Cairo Trilogy as a spectacle (Mahfouz can be a funny guy with his wordplay and that whole panorama of Egyptian society over a 25-year span definitely has its moments early on), I think I began to lose interest in it even on this level of reduced expectations somewhere near the end of the second volume.  Would Mahfouz rally and redeem himself with a grand finale?  In a word, no.  While the concluding novel in the trilogy ends with one key character dead and another one on her deathbed, I got the sense that this was less an organic ending to an epic tale hundreds of pages in the making and more a case of Mahfouz finally running out of things to endlessly wring his hands about as puppetmaster in chief.  For far too much of Sugar Street is devoted to sad sack bachelor Kamal's loss of faith and lack of interest in getting married, two potentially interesting topics dumbed down by she loves me, she loves me not scenarios played out for chapters on end in the most uninteresting of fashions (note: that kind of creepy subplot in which Kamal falls in love with the younger sister of a long ago crush, last seen by him as a toddler and now viewed by him as a romantic prospect, doesn't help in this regard).  "He felt scorched by a burning sensation that seemed a symptom of his profound pain," Mahfouz writes of Kamal at one point, the "pain" in question stemming from the middle-aged Kamal seeing a girl he had already rejected arm in arm on the street with another man (264).  I, too, felt that burning sensation, though probably less from the emotions conjured up by such Nobel Prize-winning prose than by my immune system's response to confronting such vapid howlers and unimaginably tedious interior monologues while trying to fight off a miserable cold this past week.  Fuck you, cold.  Fuck you, Sugar Street, too.  (http://www.anchorbooks.com/) 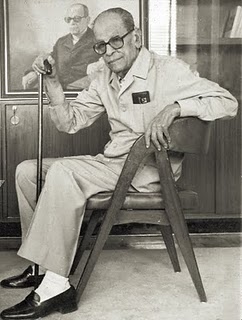 Naguib Mahfouz
Other takes on Sugar Street
E.L. Fay (This Book and I Could Be Friends)
Emily (Evening All Afternoon)
Sarah (what we have here is a failure to communicate)
Valerie (Life Is A Patchwork Quilt)
Publicadas por Richard a la/s 10:16