Crazy Horse: The Strange Man of the Oglalas 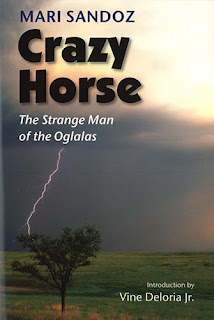 Crazy Horse: The Strange Man of the Oglalas (University of Nebraska Press, 2008)
by Mari Sandoz
USA, 1942

Although I've been dipping into and out of a number of interesting Native American-themed works of late (part of a longstanding but until recently rather hazily defined plan to read up on and explore American Indian history in all its geographic and temporal vastness), I'm not sure I could have found a much more compelling first read for my project than Mari Sandoz's so-called "difficult," "mystical" and "classic" biography of the iconic Sioux leader Crazy Horse--even if that last description is the only one of the three that makes any sense to me.  What a fantastic book.  I should start by pointing out that there's no shortage of page-turning entertainment here, the narrative being rich in jaw-dropping and novelistic anecdotes like the one in which a Cheyenne war party, emboldened by a traditional bullet-proofing ceremony, bravely goes out unarmed to confront a white cavalry contingent only to have the horse soldiers lower their weapons to apply bayonets for a bullet-less charge instead (97).  Other moments, while much less surrealistic in their depiction of the clash of cultures which Crazy Horse lived through and was in a sense a martyr to, are almost equally striking in their evocation of a Sioux society in transition from the pre-white man freedom of the hunting and roaming days to the post-white man bondage of "civilized" reservation life.  Interestingly, one of the things that made this tick as a reading experience for me wasn't just what Sandoz shared or the memorable life story of the person she was writing about but an unusual choice she made about how to present her narrative.  In a work seemingly lacking in all proper distance between the biographer and her subject, the white Sandoz notes that she intentionally went out of her way to write her story "us[ing] the simplest words possible, hoping by idiom and figures and the underlying rhythm pattern to say some of the things of the Indians for which there are no white-man words" (xxii).  Sound like a bad idea to you?  Well, that's what I thought at first until I settled into Sandoz's rhythm and discovered that the end result of her linguistic gambit wasn't the patronizing attitude toward Indians that I'd feared but rather a novel way for non-natives to appreciate the Oglalas from something approximating an insider's perspective.  In point of fact, Crazy Horse: The Strange Man of the Oglalas is so consistently "Oglala" in its POV that it neither glosses over what some might view as its hero's faults (e.g. shooting a woman in the back as his first war kill) nor bothers to justify the Oglalas' seemingly petty but murderous warfare with historic enemies the Crows and the Snakes (the author seems to accept this bloodsport as a fact of life not worthy of further explanation).  In any event, I really enjoyed my time with this intimate, surprisingly affecting portrait--and, ugly New Age cover aside, I was sorry to put it down when I got to the end.  (http://www.bisonbooks.com/)