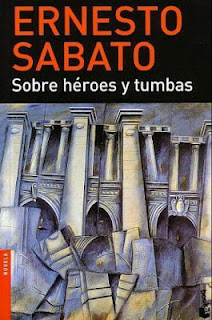 Since Sobre héroes y tumbas [On Heroes and Tombs], once considered to be an undisputed classic of the Boom decade and now seemingly struggling just to maintain its mere "disputed classic" status among Lat Am lit fans not named Ignacio Echevarría, was something like 3/4 "pretty good" + 1/4 "laughably bad" according to the uncanny but always accurate arbiter of excellence calculations I worked out on scraps of paper over the course of two calendar years, this post is going to have to be somewhat more complicated than I'd originally intended.  Damn you, Sabato!  A 508-page chunkster that intermittently intercalates a dry 1840s historical narrative having to do with Argentina's civil wars into a gothic 1950s Buenos Aires crime story in which the daughter of one of the leading families of the city decides to burn her father and herself to death in a premeditated act at least partially related to the family's genetic predisposition to mental illness, the novel is an ambitious but sprawling mess which--at its best--actually delivers an emotionally and psychologically convincing story of star-crossed teenaged lovers Martín and Alejandra set against a lugubrious and politically turbulent Baires backdrop.  At its worst, as in the 150-page first-person "Informe sobre ciegos" ["Report on the Blind"] said to have been prepared by Alejandra's father and completed on the night of his mysterious death, the novel offers up a cheesy and over the top example of Sabato trying too hard to impersonate the voice of a cruel, paranoid, incest-driven madman and failing badly.  Which is too bad because, the dimestore surrealism and Dostoevsky-wannabe bits aside, Sabato's use of Buenos Aires as a setting feels authentic and is occasionally utterly compelling--here, in this bit involving a Borges cameo, for example, and later on, when Roberto Arlt gets namedropped in the middle of a wild screed focused on immigrants and anarchists before the coup against Yrigoyen in 1930.  In other words, an OK read but hardly the big deal it's sometimes made out to be except in snatches.  (Booket) 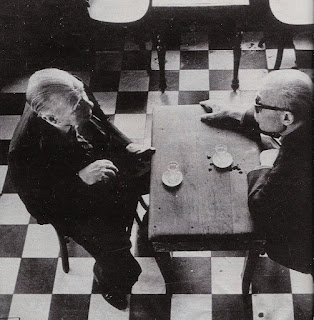 Borges (l) and Sabato at the Bar Plaza Dorrego in San Telmo, Bs.As.