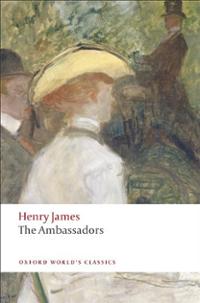 For all the not necessarily totally untrue lit crit chatter about the late-period Henry James being both the king of exquisitely tortured syntax and, what's more, a sower of the plague of narrative misdirection of almost biblical proportions via his deliberately halting, preternaturally inward-looking promotion of the use of indirect free discourse--literature's equivalent of the no-look pass--as an essential storytelling strategem at the expense of the 20th century's preferred steam engine of plot, I have a rather pedantic question to put to all of you more bibliographically savvy late James connoisseurs upon having recently finished my first novel by the guy in almost three decades: how come none of you fuckers ever told me what an unexpected page-turner he could be?!?  Ironically given my appreciation of the work's many charms, The Ambassadors doesn't sound like it would amount to a whole lot of fun pour moi even as I deign to write a capsule summary of it expressly designed to appeal to my flippant and surly self.  Lambert Strether, a mild-mannered 55-year old American from the manufacturing mecca of Woollett, Massachusetts, is dispatched to the City of Light (continent: the Old World) to retrieve Chad Newsome, the wayward son of Strether's patron and would-be love interest and future wife, the forbidding Mrs. Newsome.  The initial concern is that the fun-loving young Newsome is assumed to have gone native abroad--probably in the perfume-scented and fur-lined grips of a more worldly Parisian woman--but is now wanted back at home for the sake of the family business.  The reliable Strether naturally is deemed just the right man for the job of going about rescuing Chad--or at least he is until something about his new surroundings begins to open his hitherto complacent eyes to a new way of life that may jeopardize the profit that both he and Chad are sure to receive should they reject European freedom and return to their provincial New England Paris in Woollett.  All sorts of troubles--some funny, some rather sad, all masterfully related--ensue.  That being said, part of the joy of reading The Ambassadors is to be found in observing Strether's gradual awakening to the idea that he's let life pass him by.  "I seem to have a life only for other people," he wistfully admits at one point, an innocuous enough statement except that, in James' gifted narrative hands, the reader can sense that Strether's newfound self-awareness might have come too late in his life to profit him but not others as far as his diplomatic mission regarding Chad's return is concerned (191).  Why would I characterize such a bittersweet reflection as a joy?  Simple, it's always a delight to run into complex characters in real life or in print that you can actually care about.  On a related note, I also appreciated the subtlety of the depiction of the evolving friendship between the older Strether and the younger Chad and the assured, convincing interplay among the other characters in the novel in general.  Javier Marías' Your Face Tomorrow trilogy might have been the last modern work I read that had a similar depth to the characterizations paired with the feeling that conversations were being played out for me in something approximating real as opposed to novel time.  Finally, for all my joking about James' reputation for linguistic and narrative obfuscation at the outset of this post, The Ambassadors is actually an amazingly revelatory affair in which the art of deception--marital, storytelling, and otherwise, including a bloodless coup of a subplot "about" adultery in which adultery is never mentioned to the detriment of all the key characters involved--and our innately human capacity for self-deception are intricately intertwined thematically and in terms of how the story itself is related up until its crown jewel of a final line.  Considering the mixed reactions I had to other James titles when I was a lowly undergrad, a stupendous surprise and an enormously satisfying treat.  Yeah.