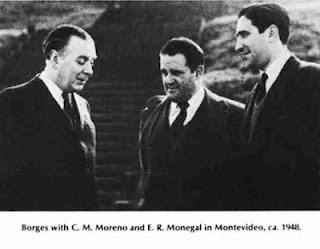 Rodríguez Monegal continues to riff on these points in the ensuing paragraphs.  To give you an idea of why I tend to find more value in a careful 50 year old close reading than in the kind of vacuous criticism provided by some of the cutting edge literary theorists today, here's a good example of just one of those riffs on the nature of the geography on display in Grande Sertão: Veredas and the sense of space in the works of other new era Latin American contemporaries.  The first part of the comparison is from page 994, the second from 994-995: