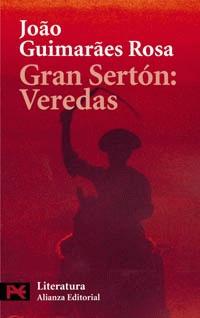 If I were ever going to rewrite my first post on Gran Sertón: Veredas, I'd definitely want to find a way to talk about the great Thucydides-like setpiece having to do with Zé Bebelo's judgement that takes place about halfway through the novel: a riveting sequence where the captured jacunço captain receives a battlefield trial by jury by his enemy peers while his life hangs in the balance waiting for the verdict to be arrived at by the succession of impassioned speeches that follows.  What do you think: does he deserve some sort of clemency or should he swing for the crime?  I'd also like to take a look at the strange company of Canudos-esque end times castoffs and smallpox survivors (often featuring a black child on his left and an elderly blind beggar on his right) that Riobaldo, the so-called "Víbora-Blanca" or "White Viper," rides into (pre)destiny with at the end of the novel like some kind of a fucked-up messiah.  Surely there must be some kind of elaborate backlands good vs. evil symbolism to tease out there.  And hell, let's face it, a few more colorful quotes about God and the Malignant One and even some non-metaphysical stuff probably wouldn't hurt either: Riobaldo's lament, "Joven: toda añoranza es una especie de vejez" ["Young man: all nostalgia is a form of old age"] (55), is a priceless pearl of wisdom that has absolutely nothing to do with the conception of the novel as some sort of satanism handbook--arresting as that may be--and even drawing attention to the use of three fatalistic but somewhat pedestrian backlands proverbs in a row ("Si mañana fuese mi día, pasado mañana no me vería"; "Antes de niño nacer, la hora de tu muerte marcada es"; "Si de tu destino es la fecha, a la medianoche no llegas..." ["If tomorrow were my day (i.e. to die), the day after tomorrow you wouldn't see me"; "Before being born as a babe, the hour of your death is marked"; "If it's your date with destiny, you won't make it till midnight"] (507) might be an effective way to spotlight the oracular flora and fauna scattered throughout Guimarães Rosa's text like pages ripped out of the book of life.  And so, although I won't be rewriting that first post as difficult as it was for me to try to say all that I wanted to about GS:V at the time (remember: "el sertón es del tamaño del mundo" ["the sertão is the same size as the world"]) (87), I'd like to take this opportunity to shill for the next one--something that will assume the form of a desperate striving to provide just some sort of unsolicited but sorely-needed context for a work that at least one critic has referred to as The Odyssey to The Iliad that is Euclides da Cunha's stupendous Os Sertões [Backlands: The Canudos Campaign, which you can read about in three mostly previously ignored installments here: #1, #2, and #3].