JOÃO GUIMARÃES ROSA, or the Third Bank of the River 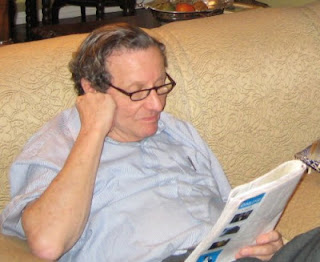 "JOÃO GUIMARÃES ROSA, or the Third Bank of the River"
by Luis Harss and Barbara Dohmann
Argentina, 1966

Well, I guess Chapter IV of Into the Mainstream: Conversations with Latin-American Writers should be just as good a place as any to wrap up the Grande Sertão: Veredas festivities for the moment.  The set-up:  sometime during the early to mid 1960s, Luis Harss and Barbara Dohmann traveled to Rio de Janeiro to interview the Brazilian novelist, and the 35-page word portrait--part biography, part criticism, part interview--that came out of the encounter is sandwiched in between similar profiles of Jorge Luis Borges and Juan Carlos Onetti that I hope to share with you someday.  Appropriately enough given João Guimarães Rosa's interest in the region, the chapter begins with a mention of Brazil's sertão in which the authors note that "to name the sertão is to evoke a vast highland expanse that stretches across a third of a country and several geological eras" (137).  A reference to Euclides da Cunha's "momentous evocation" of the land and the "epoch-making" military expedition that he chronicled in Os Sertões [Backlands: The Canudos Campaign] naturally follows, which produces the usual comparison between Da Cunha and Guimarães Rosa but one couched in unusually heated language.  All the same, I have to say that I quite enjoyed this bit even though I feel Da Cunha gets wounded in the crossfire (139-140):


Da Cunha, a reformer on the stump, combined documentary zeal and fine scholarship with poetic flair.  He gave a dramatic account of the campaign, and also drew an authentic portrait of social crisis, in a vigorous, flexible, baroque style of enormous influence in Brazilian literature.  Guimarães Rosa in some sense takes up where he left off, but on another level, far beyond anything da Cunha probably ever dreamed of.  He not only fulfills a vision but culminates a whole literature.  He is at the confluence of many streams, a humanist, like da Cunha, but also, and perhaps more important, a badman, like Conselheiro.  Where da Cunha scratched the surface, he draws blood.  The fires that feed his work are abysmal.  So is his language, often invented, always hammered out in a deep inner forge.  In this he is in the tradition of a long line of renewers who in various ways fought a more or less losing battle against the petty tyranny of the flat style predominant in Brazilian fiction, which, in spite of enormous mineral resources, has always been allergic to new forms of expression.

After mentioning two steppingstones in the form of Oswald de Andrade's 1922 trilogy Os Condenados [The Condemned] and Mario de Andrade's 1928 "imagistic prose poem" Macunaíma and just before giving a curt backhanded compliment to the Brazilian regionalism movement ("Certainly there is much to be said for the northeastern novel, the first to reveal some of the more desolate aspects of Brazilian reality in their true color, but its conventions, suspiciously homogeneous, have worn, and it has begun to seem a bit prehistoric"), Harss and Dohmann add an emphatic exclamation point to their verdict:  Guimarães Rosa "stands squarely in the mainstream of modern literature, with its complex Proustian wiring, its Joycean undertow.  At his shoulder is the Goethean alchemist, only a shade removed from the Dostoevskian mystic.  Not that he echoes anybody.  He is the original mesmeiro, to use one of his own terms: the man who is always himself, perfectly sui generis" (140-141).  Also, "in him outer scope is inner range.  His sertão is the soul of his country, as the Chekhovian steppes were the soul of Russia" (142).

After this intro, a mini-biography leads up to a description of the meeting with Guimarães Rosa.  "Physically and temperamentally he carries his German ancestry clearly written on him," we are told.  "German, with its infinite subtleties, is the foreign language he seems to speak best, from natural preference."  German is the language that our three South Americans will conduct the interview in (145):

We mix it with English, French, his battered Spanish, our broken Portuguese.  He is a great linguist, philologist, etymologist, semanticist, who, besides Portuguese and, of course, the basics--German, French, English--reads Italian, Swedish, Serbo-Croatian, and Russian, and has studied or dabbled in the grammars and syntaxes of most of the other main languages of the world, including such tongue twisters as Hungarian, Malayan, Persian, Chinese, Japanese, and Hindi.  Understanding the structures of other languages, he says, with undeniable logic, helps you use your own; it reveals hidden possibilities, suggests new forms.  It also sharpens your ear to people.  A Pygmalion who likes
to shape characters from their speech, he can tell a man, his region, his occupation, from his accent.

His occupation?  Some possible leg-pulling aside, a surprisingly personal portrait of Guimarães Rosa the man as opposed to Guimarães Rosa the writer eventually begins to emerge from the hybrid biography/criticism/interview format employed by Harss and Dohmann.  Some of it is sad: "If I had another hundred years to live," said the storyteller who would be dead before long, "I wouldn't have time enough to write down all the stories I have in my head" (146).  Some of it is kind of funny because it's exactly how I would expect the author of GS:V to talk: "I'm against time and in favor of eternity" (148).

Although I unfortunately don't know anything about Dohmann's background or writing role as far as Into the Mainstream is concerned (in the Spanish version of the work translated as Los nuestros, Harss is given top billing and Dohmann is only listed as a contributor), I suspect that the Chilean-born and U.S.- and Argentinean-raised Harss' experience as a critic is likely responsible for some of the nuanced close readings featured in this chapter.  Unlike what you might expect from the previous quotations, Guimarães Rosa isn't given a free pass from "negative" criticism of his work.  For example, here's an instance where a critique of the use of the unnamed listener as a foil for Riobaldo's monologue in GS:V morphs into a spirited description of the novel's structure:

The Conrad-like convention somewhat hobbles the story, which is perhaps overly discursive, but also shapes it.  A single initial impulse that gathers momentum as it goes--there are no chapters--becomes a mighty outpour somewhere between a confessional monologue and a happy-go-lucky picaresque, comic, parodic, effusive, extravagant, recalling both the medieval romance and Cervantes.  But the self-torturing, inner-questioning strand that runs through the book like a dark thread is in the great tradition of the Russian and German novels.  The structure is circular.  The voyage through space and time ends where it begins, in the psychic present, a constantly evolving mental substance out of which conscience is gradually formed.

And here's an even more strongly worded complaint about some of the great novel's alleged minor defects:

Grande Sertão, like the Talmud, is an intricate and somewhat unwieldy colossus.  Not all is perfection.  The wasteful convention of the listener, which is bothersome at first, and sometimes retardatory later, seems unnecessary and unreal.  Riobaldo is a great raconteur.  He needs no specific audience.  But here is another pitfall.  Riobaldo has a breath-taking tall tale to tell.  Little wonder he gets carried away with himself.  He talks circles around us.  Because the hectic pace of word and imagery he sets at the beginning has to be maintained throughout, the verbiage sometimes tends to short-circuit the narrative.  The circular structure helps clog the pipes.  In spite of constant action and movement, many pages seem static.  The very wealth of detail, one of the beauties of the book, is numbing in the long run as it begins to cancel itself out.  Then there is the matter of Diadorim, who, unlike the other characters, all--except perhaps for the women, who are less individualized than the men: they tend on the whole to be fairly conventional figures--vivid portraits, rounded out at their fullest point, never quite materializes (168-169).

Whether one agrees with the individual points or not, it's refreshing to see this sort of balance in a study that examines all of Guimarães Rosa's own body of work and in a work that Harss proclaims in a note to the new edition of Los nuestros was just "un libro de modestas ambiciones: juntar unos retratos de autores basados en entrevistas" ["a book of modest ambitions: gathering together a few author portraits based on interviews"] and "una reliquia de época" ["a relic of the age"] in which it was written (Madrid: Alfaguara, 2012, 11).  I'm looking forward to the other author profiles.  P.S. Those inclined to track down this long OOP text will be rewarded with a super juicy and personality-rich survey of Lat Am lit up through 1966, "Prologue, with Musical Chairs," which memorably begins as follows (1):
﻿
There used to be a tradition somewhere in Latin America--was it Guatemala?--that poets, the favorites of the Muses, got free bus rides.  The privilege, apparently, did not extend to novelists, who either had to pay their way or walk.  If there was a certain injustice in this state of affairs, it reflected an established fact in our literature.  Our poets were riding high when our novelists were still eminently pedestrian.
﻿
Source
Harss, Luis and Dohmann, Barbara.  Into the Mainstream: Conversations with Latin American Writers.  New York, Evanston, and London: Harper & Row, 1966, 137-172 [note: the book lists a 1967 date; Harss and others claim it came out in 1966].  Photo of Harss: courtesy of his "personal archive."﻿
Publicadas por Richard a la/s 04:55