The Golden Age: Poems of the Spanish Renaissance Group Read 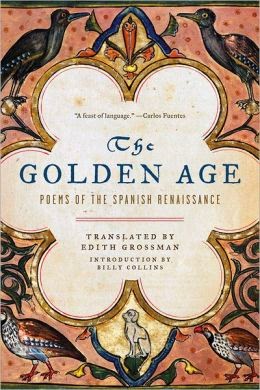 April's Caravana de recuerdos Ibero-American Readalong group read selection is the Edith Grossman-curated The Golden Age: Poems of the Spanish Renaissance, published by W.W. Norton & Company in 2007 with a facing page English translation of poems also appearing in their original Castilian, which presents an all-star lineup of Spain and New Spain verse talent from about the middle of the 15th century to the end of the 17th century: Jorge Manrique, Garcilaso de la Vega, Fray Luis de León, San Juan de la Cruz, Luis de Góngora, Lope de Vega, Francisco de Quevedo, and Sor Juana Inés de la Cruz.  Household names all, dig?  But if those names alone aren't enough to whet your poetic appetite to the point where you're practically salivating to join me for the group read, here's a juicy six year old post from our friend Tom of Wuthering Expectations in which he notes that "this is really an admirable book" and "my only actual complaint is that the book is much too short."  What he said!  Anyway, thanks to Tom for the push to add this collection to the syllabus for this year since it includes some of the most famous and the most dazzling Spanish poetry of the Siglo de Oro era, it's still in print and it's available for less than a $15 cover price in the U.S.  N.B. Those who'd like to read along with me should plan on coming back for the discussions somewhere around April 28th thru 30th; those who'd just like to see me fall on my face wrestling with a rare poetry offering in public can come back around the same time.  No harm either way.