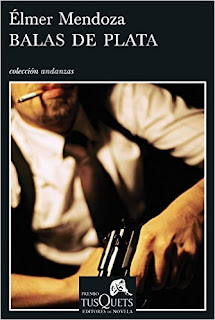 For a book whose author has a rep as "el 'jefe de jefes' de la narcoliteratura" ["the 'boss of bosses' of narcoliterature"], Élmer Mendoza's cult classic Balas de plata [Silver Bullets] didn't really live up to its hype for me.  Guess maybe that cheesy cover should have been something of a tip-off.  The novel, an entertaining enough genre workout by the way, follows 43-year old Jetta-driving and tequila-drinking Mexican cop Edgar "el Zurdo" ["Lefty"] Mendieta through the mean streets of Culiacán on the trail of the murderer of a high powered lawyer.  Problem #1 for the detective: all the main suspects have narco connections to one degree or another.  Problem #2: dirty cops and people of influence from as far away as Mexico City all want the case closed unsolved.  Problem #1 for the reader: c'mon, this is all pretty fucking tame coming after the narcoliterature agony and ecstasy that was Bolaño's 2666.  Problem #2: like I said.  To be fair to Balas de plata as a simple crime novel, Mendoza makes up for some of his work's high energy but rather pro forma thriller flaws with a convincing use of Mexican street slang and amusing literary winks to the likes of Fernando del Paso's Noticias del imperio [News from the Empire], Ricardo Piglia, and Juan Rulfo's Pedro Páramo.  And on the narcoliterature front, an old school hitman's lament that rich narcos' new taste for killings for hire involving dismembering bodies, dragging victims to their deaths, and castrations shows that Mendoza's flair for irony ought not be underestimated: "Nosotros somos una empresa con ética y jamás hemos aceptado esas comisiones" ["We run an ethical business, and we've never accepted those kinds of commissions"], the hitman says.  "Es un ser humano el que vamos a matar, no un animal salvaje" ["It's a human being we're going to kill, not some wild animal"] (155). 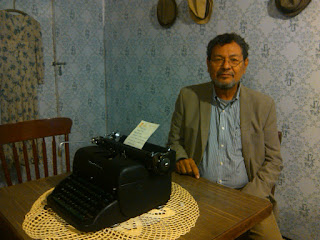