God's Middle Finger: Into the Lawless Heart of the Sierra Madre 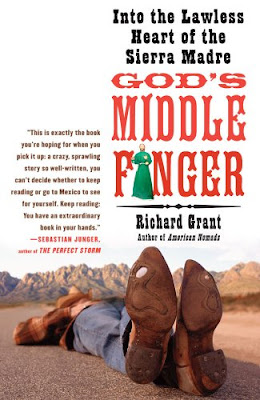 "If someone had come up to me in my early twenties, when men are supposed to be at their most reckless, and offered me a fortune to go into a place like the Sierra Madre, I would have thought about it for about three seconds before saying no. Except for alcohol and drugs, I was a fairly cautious young man, afraid of heights, roller coasters, high-speed driving, the police, guns, snakes, big spiders, and venereal disease. I avoided fights and adventure sports and I tended to doubt the sanity of those who put themselves deliberately in harm's way, much as some people now doubt my own sanity. So what happened?" --God's Middle Finger, p. 16

I checked this out from the library last week as a change of pace from more serious reading I had going on, but it quickly took over to the point that those serious plans wound up shelved. Part travelogue/part one-man Mexican Jackass episode, God's Middle Finger is a hysterical account of the three months that the British-born/Tucson-based journalist/thrill seeker Grant spent chasing adventure in the Sierra Madre mountain range. Although some of his "research" involved things like binge drinking with new friends and doing coke off knives in bathrooms with the local cops, Grant survived to tell the tale and his journalistic chops served him well even when his judgement probably didn't. Here's an example. In trying to figure out the intense hold that the region held on his imagination, Grant questioned locals from all walks of life on subjects as diverse as the mystery surrounding the fate of the last Apaches, the effects of the drug trade on the area in recent times, the prodigious long-distance running feats of the Tarahumara Indians, and the historic roots of the bandit culture. The result is an entertaining, informative and surprisingly well-written traveler's tale that should provide great adventure reading fare for those skeptical of the idea that all narcotraficantes are saints. Includes a nice recap of previous writing on the Sierra Madre region and some of the most hilarious translations of Mexican profanities I've ever seen! (http://www.simonandschuster.com/) 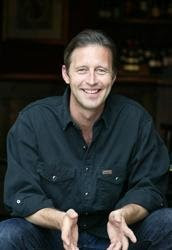 Click here for a 5-minute Arizona public TV interview with Grant about this book from April 2008.
Publicadas por Richard a la/s 20:57