The Woman In White

Although British literature as a whole has to rank as one of the most overrated examples of a national literature anywhere (admit it, bloggers--how many tales about governesses and class bias do you really need?), I enjoyed The Woman in White enough that I could see adding it to old favorites like The Canterbury Tales and "Clash City Rockers" on a list of things from across the pond that don't suck. Whether or not that makes this a true classic or not is another story, but this goofball first "Sensation Novel" makes up for its lack of depth in terms of what it has to say by how it says what it does: unraveling the mystery behind "the woman in white," a story that touches on false imprisonments, poisonings, secret societies, and star-crossed lovers, via a series of courtroom-style witnesses to the prosecution.  Although Collins tries too hard to draw attention to the gender differences among his narrators (a typical howler from a female character: "I dare say it was very wrong and very discreditable to listen--but where is the woman, in the whole range of our sex, who can regulate her actions by the abstract principles of honour, when those principles point one way, and when her affections, and the interests which grow out of them, point the other?" [228]), the novel's ensemble effect is marvelous at masking how increasingly uninteresting the main character, Walter Hartright, is in comparison to the mannish Marian Halcombe and the devilish Count Fosco--a fantastic villain whose evil ways reach a comic zenith when he feeds an organ-grinder's monkey some "lunch" but "contemptuously" fails to provide any sort of a handout at all for the organ-grinder himself!  Elsewhere, Collins also gets a thumbs-up for presenting a love affair between Hartright and Laura Fairlie that rings true emotionally.  Unfortunately, I had to dock him a couple of points for throwing his hero into jail temporarily for merely jostling another man--the novel's low point--and for making us wait so long before Count Fosco's bombastic turn in the spotlight ("Youths!  I invoke your sympathy.  Maidens!  I claim your tears." [628]).  Fortunately, Fosco's maniacally unhinged written declaration near the end redeems any creaky plot elements in the 600 pages that preceded it--and might just have opened up the door for me to a possible follow-up reading of Braddon's Lady Audley's Secret, Dickens' Great Expectations, Wood's East Lynne, or some other guilty pleasure.  Any suggestions?  (www.oup.com/worldsclassics) 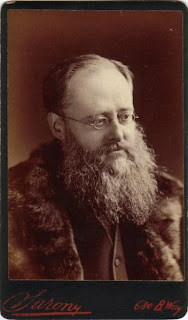 Thanks to Trish of Trish's Reading Nook, whose review of The Woman in White here made me want to read Wilkie Collins again after I'd forgotten about him for years and years somehow!