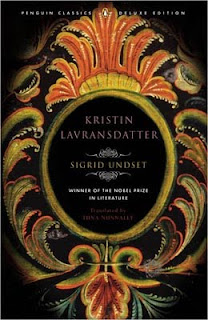 "'Kristin, my dearest love,' begged Erlend in despair.  'Oh, Kristin, I know I've come to you much too late...'

Again a tremor passed over his wife's face.

'It's not too late,' she said, her voice low and harsh.  She stared down at her son, who lay in a swoon in her arms.  'Our last child is already in the ground, and now it's Lavrans's turn.  Gaute has been banished by the Church, and our other sons...  But the two of us still own much that can be ruined, Erlend!'"  (Kristin Lavransdatter, p. 973)

by Sigrid Undset (translated from the Norwegian by Tiina Nunnally)

While I must have spent hundreds of Kristin Lavransdatter's 1124 pages trying to figure out whether inept storyteller Sigrid Undset was a bigger embarrassment to Scandinavian culture than lame-o pretentious pop star Bjork, I've decided to try to shy away from personal attacks now that Undset's historical fiction Beaches has finally reached its long drawn out tear-jerker of a conclusion.  Still, what exactly have I taken from this experience?  First, for all the people who seem to want to fawn over her for merely having created a birth-to-death portrait of a fictional woman with "realistic" flaws, Undset strikes me as an extraordinarily lazy writer.  Probably because she's so bad at dialogue, she spends endless amounts of time laboriously filling the reader in on what each character thinks and what each person looks like.  Very boring.  Second, Undset apparently never met a contrived situation she didn't like--in the key reunion between Kristin and Erlend in the passage above and in Kristin's final saintly acts when the Black Death comes to her convent, I was actually moved to laughter by Undset's cheap, Spielbergian theatrics.  No sense of subtlety whatsoever.  And even though The Cross was probably a slightly less annoying reading experience for me than either The Wreath or The Wife, I'm tempted to suggest that some of that sense of "improvement" was only noticeable due to the fact that the preceding books in the trilogy set the bar so low.  In short, a tedious and manipulative story unimaginatively told.  Refund! (http://www.penguinclassics.com/) 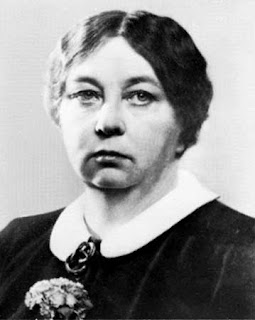 Sigrid "Woe is Me" Undset

I'll link other Kristin Lavransdatter: The Cross readalong posts below as soon as I can get to them, but thanks to everybody who read along with Emily and me and/or visited the various readalong blogs to join in on the discussions.  It was a lot of fun despite the novel in question!  If you've read the trilogy, please let me what you think of it--and if you haven't, please be aware that a certain online bookseller giant's website (let's call it Big Mythological Warrior Gal.com for the moment since this isn't one of those whorish book blogs that tries to pimp books for money) is actually full of raves of KL along the likes of the following:  "The saga covers every human emotion and possibility that can occur to a human being."  OK, I stand corrected!  I wasn't bored to death by Undset after all!!  Psyche!!!