Whatever your take on the "1st century" culture wars that would eventually usher in a new holiday shopping season for much of mankind, you have to admit that the ancient Romans were at least a good twelve or thirteen hundred years ahead of the curve on the Christians in combining comedy with sleaze.  Petronius' raunchy The Satyricon (what P.G. Walsh translates as "a recital of lecherous happenings" on page xv of his very useful introduction) is of course one of the classic cases in point, a bisexual love triangle-cum-road movie hybrid (so to speak) sometimes hailed as the oldest extant novel. Does it live up to all the hype?  Yes and no but mostly yes.  While the missing portions of the text and some of the inside jokes make for a choppy reading experience at times, the author's comic sensibilities and the episodic nature of the plot--with events set in motion by the narrator Encolpius' unexplained offense committed against the revenge-minded god Priapus--are pretty much a perfect match in terms of the amusement opportunities they generate.  The chapter on the "Dinner at Trimalchio's," an extended send-up of a vulgar freedman-turned-nouveau riche who hosts a ridiculously extravagant banquet, is Hall of Fame material as satire, but Petronius is also quite the comedic stud lampooning intellectual posturers, mischievously questioning whether true love is really just lust most of the time, and mixing poetry with prose with freewheeling élan.  Although it's too bad that more literature from the Age of Nero hasn't survived, anybody who knows how and why Petronius died will understand at least one root cause of the problem.  A "naughty" classic.  (www.oup.com/worldsclassics) 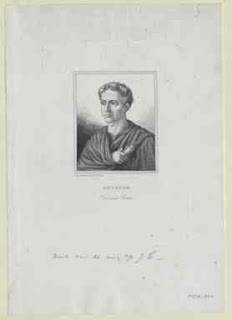 "Petronius deserves a brief obituary.  He spent his days sleeping, his nights working and enjoying himself.  Others achieve fame by energy, Petronius by laziness.  Yet he was not, like others who waste their resources, regarded as dissipated or extravagant, but as a refined voluptuary.  People liked the apparent freshness of his unconventional and unselfconscious sayings and doings.  Nevertheless, as governor of Bithynia and later as consul, he had displayed a capacity for business.

Then, reverting to a vicious or ostensibly vicious way of life, he had been admitted into the small circle of Nero's intimates, as Arbiter of Taste: to the blasé emperor nothing was smart and elegant unless Petronius had given it his approval.  So Tigellinus, loathing him as a rival and a more expert hedonist, denounced him on the grounds of his friendship with Flavius Scaevinus.  This appealed to the emperor's outstanding passion--his cruelty.  A slave was bribed to incriminate Petronius.  No defence was heard.  Indeed, most of his household were under arrest..."  (Tacitus [translated by Michael Grant], The Annals of Imperial Rome, XVI [London: Penguin Classics, 1996, pp. 389-390])