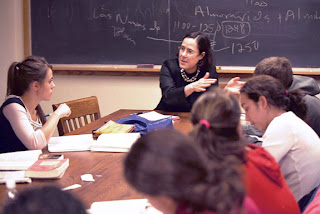 Having been inspired by both Emily's and E.L. Fay's various essay reviewing projects last year and not having been inspired by bloggers who post about YA fiction originally intended for 12-year olds, I've decided to share some of my own essay-reading experiences here from time to time this year even though I suspect that this will prob. turn out to be the blog equivalent of BOX OFFICE POISON!  Be that as it may, it's quite a pleasure for me to spend a few moments talking about Yale professor María Rosa Menocal (above, shown leading a class), whose 2002 The Ornament of the World: How Muslims, Jews, and Christians Created a Culture of Tolerance in Medieval Spain is a beautifully written and extremely engaging cultural history highlight from my pre-book blogging days.  "Beginnings," one of five chapters on "The Medieval Period" in The Cambridge History of Spanish Literature*, is a similarly provocative but much more intensely focused piece of work given its reduced scope, laying out some of the thorny questions (headings: What is Spanish, before there is Spanish?  What is medieval? What is lost?) to be confronted when trying to apply a post-1492 mindset to the study of the origins of a "national literature" when such a mindset had no such meaning for the residents of the multilingual, multi-religious Spanish society for most of the pre-1492 period in question.  While I wouldn't dream of trying to summarize Menocal's complex response to this series of equally complex questions, suffice it to say that her study is a wonderful starting point for anyone interested in seeing how Castilian interacted with Arabic, Hebrew, Latin, and other peninsular Romance languages (Catalan, Galician) in the medieval period before becoming the national and international language/literature giant that it is today.  More on Menocal, in the form of her new book The Arts of Intimacy: Christians, Jews, and Muslims in the Making of Castilian Culture (co-authored with Jerilynn D. Dodds and Abigail Krasner Balbale) and of her older title The Cambridge History of Arabic Literature: The Literature of al-Andalus (co-edited with Raymond P. Scheindlin and Michael Sells), can be expected "soon," but in the meantime "Beginnings" is exactly the sort of thing that makes me think that our top academics are the unsung heroes and heroines of the book world.  Cool.  *The five chapters in sequential order: John Dagenais' "Medieval Spanish literature in the twenty-first century"; Menocal's "Beginnings"; Andrew M. Beresford's "The Poetry of medieval Spain"; James Burke's "Medieval Spanish prose"; Charlotte D. Stern's "The medieval theatre: between scriptura and theatrica." (http://www.cambridge.org/)
Publicadas por Richard a la/s 01:37