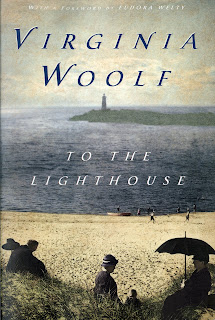 To the Lighthouse (Harcourt, no publication date)
by Virginia Woolf
England, 1927

While longtime Woolf fanatics like Emily and Frances will have to weigh in on whether my reaction is at all typical, I'm beginning to suspect that there's an ever widening gap developing between my enthusiasm for Woolf's narrative gifts and my enthusiasm for her characters.  To the Lighthouse, for example, has a full cast of marvelously-drawn, psychologically-distinct personalities--none of whom I'd care to hang out with in real life.  Perhaps that's the point.  Given that so much of the novel dwells on the small successes and the myriad failures of marriage and "family life" as seen from the perspectives of one particular family and their friends a decade apart in time, there's no need for Woolf to people it with "appealing" characters to highlight the gap between our aspirations and our disillusions or to demonstrate how men and women can feel boxed in by adhering to traditional social roles.  Then again,  perhaps success is Woolf's failure.  She's so adept at revealing the organic ebb and flow of multiple characters' thought processes that their inevitable human flaws--the pettiness, the extreme emotional neediness, the class bias, the pride--seem magnified under the x-ray vision of her prose.  Ah, the prose!  For whatever my issues with not being able to relate to Woolf's characters on some more primal level, I remain firmly under the spell of her dizzying style.  I love both the poetic phrases that pop up out of nowhere ("The pulp had gone out of their friendship," on page 21, and "A question like Nancy's--What does one send to the Lighthouse?--opened doors in one's mind that went banging and swinging to and fro," on page 146, are two favorite images from this time out) and how the characters confront their own mortality with a very particular sort of cynicism (Mr. Ramsay: "The very stone one kicks with one's boot will outlast Shakespeare" [35].).  Although I've yet to figure out exactly what Woolf intended to communicate by disparagingly dwelling on the description of one female character's "Chinese eyes," used almost like a Homeric epithet several times in the novel (see pages 17, 26, 91, 104, and 156 in the Harcourt edition), I do admire how Lily Briscoe's painting functions on so many different symbolic levels within the confines of the work: as an attempt to capture a moment, an attempt to capture a personality, an artist's attempt to "contain" reality, a search for clarity in a painting in a text devoted to much the same thing, etc.  Most of all, I'm continually mesmerized by Woolf's jump cut editing approach to storytelling and the novel way in which the technique (the first part's chapter XV in its entirety: "'Yes,' said Prue, in her considering way, answering her mother's question, 'I think Nancy did go with them'" [79]) allows her to seem to suspend time while dexterously juggling simultaneous narrative threads ("Time Passes," the second of To the Lighthouse's three parts, is another testament to the success of the author's manipulation of same).  Having probably first fallen in love with the jump cut style in the later works of Roberto Bolaño, a modern master of that brand of authorial sleight of hand, I have to say that it's quite a trip to see Woolf's experiments with it some 75 years earlier.  Pretty damn cool.  (http://www.harcourtbooks.com/) 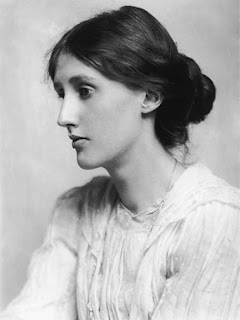 Woolf
Thanks to Emily of Evening All Afternoon for hosting discussion of today's Woolf in Winter read!  Also, see you all on or around February 12th with a post on Woolf's Orlando (next discussion epicenter: Frances' Nonsuch Book).
Publicadas por Richard a la/s 16:10