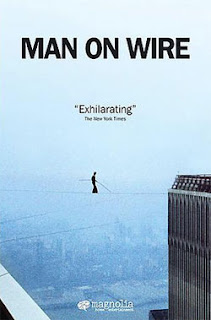 Ridiculously entertaining documentary about French tightrope walker Philippe Petit's August 7th, 1974, 45-minute waltz back and forth across a wire illegally strung up between the Twin Towers in NYC.  Although Man on Wire benefits from some of Petit's own period footage (early training videos capture him and his friends as a bunch of essentially overgrown kids seemingly entirely committed to helping the aerialist pursue his daredevil dreams), I think its soul probably lies in the remarkable series of candid interviews assembled by director James Marsh.  The playfully boyish Petit (in his later years at least, sort of a John Lydon-lookalike), his contemplative ex-girlfriend, and other friends and misfit partners in crime seem to have shared a unique camaraderie while they planned the World Trade Center stunt, and Marsh manages to capture the feeling that they really believed Petit's high-wire act to be less of a potential suicide in the making and more of a gift of rebellious art to a public in dire need of it.  Overly idealistic?  Perhaps.  But while the part of me that's not particularly fond of heights and/or unnecessarily risky behavior in general may still reject that sort of thinking out of hand, man, what a rush to see that smiling dreamer dancing in the clouds over lower Manhattan!  (http://www.magpictures.com/) 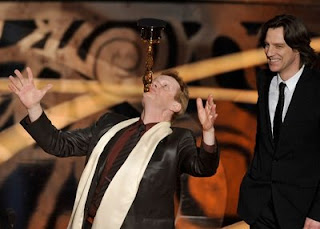 Philippe Petit (l) and James Marsh celebrate Man on Wire's win for Best Documentary at the 2009 Academy Awards.
Note: I "forgot" to mention the Orbis Terrarum Film Mini-Challenge earlier in the month because I was the only participant last time, but I'll continue to "host" this mini-challenge every other month regardless of anyone else's interest in it.  No worries, really!  If you have any foreign film reviews to share for July, though, please send me a link and I'll include it below.  In the meantime, The Baader Meinhof Complex [Der Baader Meinhof Komplex] (Germany, 2008, dir. Uli Edel) was my first selection for the event back in May (a good time but no Man on Wire).  Out.
Publicadas por Richard a la/s 12:08