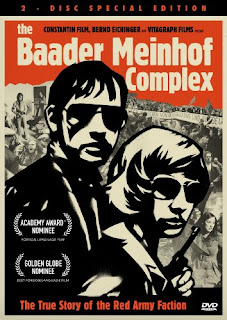 Whilst my Orbis Terrarum Film Mini-Challenge has been a spectacular bust up to this point, Uli Edel's high-energy, frenetic, and unmistakably adult The Baader Meinhof Complex (a 2009 Academy Award nominee for Best Foreign Language Film) was just what I needed to turn the page on yesterday's young adult-induced entertainment woes.  Covering 10 years in the life of the German urban guerrilla terrorist organization variously known as the Baader Meinhof Complex or the Red Army Faction, Edel's politically-charged drama is at its most daring following the kidnappers, car bombers, and political assassins from their radical anarchist points of view.  Early on in the film, for example, it's all too easy to identify with the frustrated idealism of the youth who are so torn up over the American war in Vietnam and the return of Nazis to state office that they feel a moral obligation to fight the power structures in place.  As the film progresses, though, this humanization of the killers pays unexpected dividends when it becomes clear that some of them are aware that they've become just as evil as the forces of oppression that inspired their armed resistance in the first place.  In watching the scenes where the group leaders turn on each other like rats and squabble for power inside and outside of prison, I began to wonder whether the real-life "success" of the group owed itself more to Andreas Baader, the mercurial thug with an apparent cult of personality over his followers, or Ulrike Meinhof, the one-time theoretician of the group who was a well-regarded journalist before turning terrorist.  The film, based on Stefan Aust's well-regarded nonfiction piece, Baader-Meinhof: The Inside Story of the R.A.F., and including at least two shots attesting to the group members' reading of Moby-Dick as a call to arms against the state, wisely never says, a tribute to its questioning as opposed to didactic style of filmmaking.  Not the greatest movie ever and maybe a little too slick for its own good with the editing in spots but basically a fine piece of work overall with a hyper "journalism" sensibility that reminded me of David Fincher's 2007 Zodiac.  Well worth watching.  (http://www.mpihomevideo.com/) 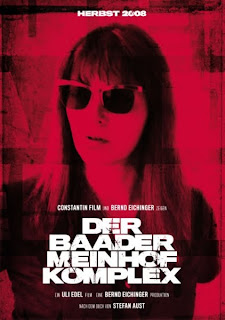