Lost in Mistranslation: Penguin's Underwhelming and Unreliable "The Swindler" 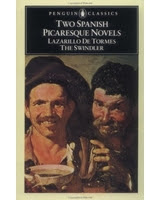 On Tuesday, I promised you all a post about why I thought Michael Alpert's Penguin translation of Francisco de Quevedo's 1626 La vida del Buscón--along with the anonymous Lazarillo de Tormes and Mateo Alemán's Guzmán de Alfarache, commonly regarded as one of the three greatest picaresque novels to come out of Spain--was such a dud in its English incarnation as The Swindler.  While I realize that the vast majority of you won't be bothered by the idea of a bad translation of a book you were never going to read anyway, I hope those of you interested in translation matters in general will bear with me for a couple of moments while I relate this "cautionary tale."  Although I actually have a lot of complaints about the translation, I'll try to keep things relatively brief and non-technical as regards the language issues.

At the beginning of Chapter Twelve in Alpert's translation of The Swindler, we find the rascally narrator Pablos on the road to Madrid in the Castilla-La Mancha region in Spain.  "But to get back to my journey," he writes, "I was riding on a grey donkey like Sancho Panza and the last thing I wanted was to meet anybody when, in the distance, I saw a gentleman walking along with his cloak on and his sword by his side, wearing light breeches and high boots" (147).  This gentleman, whose appearance, manners, and hard luck may superficially remind some of Don Quixote, will then fall in with Pablos for a spell in what looks like it could be a send-up of an adventure from Cervantes' recent runaway best-seller.  So what's the problem with such a tantalizing metafictional scene? It doesn't appear this way at all in my Spanish version!  At least, there's no mention of Sancho Panza in my Quevedo--just the detail that Pablos was riding on a "rucio de la Mancha" [gray horse from La Mancha] (II, 5, 95 in the Spanish text).  Is Alpert trying to embellish the Don Quixote-like "cameo" for English readers, using a variant text, or just making shit up?  It's hard to say.  While there are at least three Buscón manuscripts known to scholars in addition to various printed versions of the novel, Alpert never once mentions which version of Quevedo's text he's used as the source for his translation.  Kind of a big problem there, no?

While I wouldn't expect Alpert's "popular" Penguin translation of The Swindler to have the full critical apparatus of Fernando Cabo Aseguinolaza's academic Crítica edition of La vida del Buscón given that they were probably put together with different audiences in mind, my concerns with not knowing Alpert's source text are compounded by disputes with his translation itself.  I've already mentioned elsewhere how his mistranslation of a raunchy joke about priests and prostitutes misses a wicked anti-clerical jab by Quevedo.  In addition, he muffs up simple translations often enough that I'm not sure whether he's just sloppy or whether he's actively trying to rewrite Quevedo.  Sloppy: Translating "four" years (120) instead of the correct "forty" years (Quevedo, 55) in the description of how long Pablos' uncle had worked as a hangman.  Actively rewriting: Substituting "man of leisure" (86) for "caballero" [gentleman or nobleman] (Quevedo, 12) when translating Pablos' stated goal for what he wants to become in life.  Granted, some of these quibbles are minor--but some are not.  In any event, they all tend to erode my confidence in the English version of the work.

As does Alpert himself.  If I can step away from the nitty gritty of the translation for a moment, I have to say that the personal side of himself he reveals in his introduction makes me less forgiving of his miscues as a translator.  He would almost certainly make a dud tour guide as well.  Check out these three asides: "The pícaro's goal is respectability, which means money, and of course he is keen to make the best showing he can in the world; Spaniards traditionally are" (7).  "The author satirizes at the same time the traditional Spanish preoccupation, quedar bien: to impress, to make a brave showing in the world.  No one can have failed to notice it who has been to Spain and seen how apparently poor people dress impeccably and spend their money freely" (9).  "Besides, that Spaniards are proud is a truism" (10). These comments, while they may not be as "racist" as many of the barbs in Quevedo's 17th century text, rub me the wrong way with their 20th century cultural stereotyping...and this from a British translator who discusses Spanish currency in terms of the "farthing" on page 85!  Maybe translators should just be seen and not heard, I don't know.  In any event, the sad thing is that Alpert's translation of The Swindler--as underwhelming and unreliable as it is in my estimation--is one of the few ways for English readers to experience a Spanish classic so wrongly comic that it almost landed its "anonymous" author in hot water with the Inquisition.  More on that in a day or two perhaps along with a quick look at some of the other targets of Quevedo's humor.
Publicadas por Richard a la/s 12:22