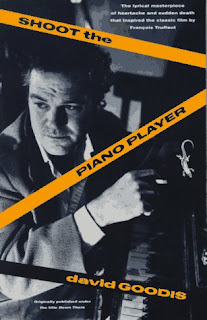 Even if, like me, you've stupidly somehow never seen the famous 1960 Truffaut film that was based on this book, it doesn't exactly take a genius to figure out that something bad is going to happen to someone good early on in Shoot the Piano Player (originally published as Down There in its pre-movie tie-in incarnation).  That being said, I've got to give Goodis a lot of credit for at least making me hope I'd be wrong about who was going to get it by the end.  A gritty noir about what trouble walks into reclusive piano man Eddie's life the night a couple of mob goons chase his wayward brother into the Philly dive bar where he works, this slender novel also works in some affecting nods to family ties, the true cost of loyalty, and the unexpected kindness of strangers who can't be bought in the course of its 158 pages of bleary-eyed tragedy.  Although it doesn't all work--like in a lot of pulp fiction, characters would sometimes say and do things that just left me scratching my head in disbelief--enough does that I'd consider trying out another Goodis down the road.  In the meantime, two things really stood out for me here.  The first was Goodis' flair for characterization: in a Harriet's Hut full of carnivalesque barroom archetypes, the salty bar owner, the ex-professional wrestler turned bouncer, the waitress carrying a hatpin for protection against unwelcome advances, and even the house prostitute all seemed genuine as individuals.  The second was that Goodis was quite sympathetic toward his female characters, to the point that Lena the waitress could even be considered the most complex of all the leads in this otherwise high-testosterone genre workout dedicated to male criminality.  While the downward trajectory of Goodis' career as a writer--in specific, the flight home from Hollywood after the onetime bestselling author flopped out as a screenwriter and the subsequent return to an apartment above his parents' Philadelphia garage, where he's said to have spent the rest of his short life as an alcoholic churning out works that were largely ignored in this country--kind of makes him seem like a figure out of one of his very own novels, I halfway wonder whether his own experience with the heads or tails of "success" and "failure" accounts for the tender, almost sentimental treatment of his main characters here.  Of course, that doesn't keep any of them from dying.  (http://www.vintagebooks.com/) 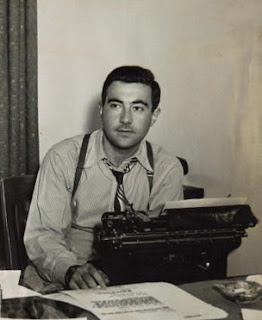