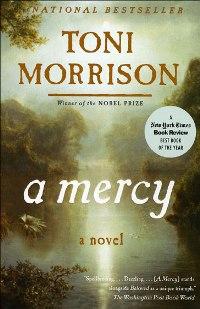 With all due respect to the friends who have raved about various Morrison titles to me, I'm not sure that the novelist and I are cut out for each other.  Dud historical fiction tearjerker that starts out with a provocative premise--a 17th century slave mother voluntarily abandons her daughter in the hopes that the act will save the child from a harsher life--before eventually bogging down in uninteresting storytelling and a surprising lack of subtlety.  While the novel's not without its merits (an early slave-buying scene, for example, is undeniably chilling with its spotlight on the participants' callous contempt for the human dimensions of the "merchandise" on sale), I found the narrative to be way less compelling than advertised.  First of all, there's the matter of point of view.  A Mercy is ambitiously narrated from the perspective of a number of characters--black and white, slave and free--but the resulting chorus was largely unconvincing to me.  In some cases, as in the Mistress' recollection of her journey from England to the Americas, I felt as if Morrison were committing the cardinal historical fiction mistake of dumping a lot of intrusive period details into the mix to make it seem more authentic in regard to time and place.  Just let the story flow.  In others, as in Florens' interior monologue about her love for the blacksmith, I was just annoyed by the exaggerated simplicity of the various characters' speech and thoughts: "With you my body is pleasure is safe is belonging.  I can never not have you have me" (161).  Not exactly beguiling prose.  Although I get the idea that Morrison probably wrote the characters the way she did to reflect their otherness somehow, I doubt that her lack of subtlety can be explained away quite as easily.  When the character Sorrow gives birth to a baby daughter and utters, "I am your mother... My name is Complete" (158), for example, I didn't know whether to laugh or cry at the made-for-TV-movie level epiphany.  Are you fucking kidding me?  In any event, not really the book for me nor the best argument for reading a novel in lieu of a work of history when given a choice.  A disappointment. (http://www.vintagebooks.com/) 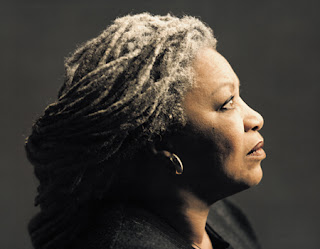