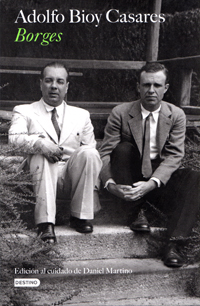 In a nod to Tom (né Amateur Reader) and his current Portuguese Literature Challenge being held over at Wuthering Expectations and the fact that I'll soon finally be reading Eça de Queirós' The Crime of Father Amaro as a result of said challenge's call to reading arms, here's a snippet of Adolfo Bioy Casares and Jorge Luis Borges on the high-strung Eça de Queirós lifted from Bioy Casares' smashing Borges diary pictured above:


Martes, 14 de junio [1955]
Hablamos de Eça de Queiroz; decimos que desearíamos que hubiera más libros de Eça; que todo lo que escribía era agradable; que era muy superior a sus maestros, a Anatole France y aun a Flaubert.  Borges tiene un instante de duda, cuando menciono a Flaubert; luego dice que Madame Bovary es un libro mucho más pobre que El primo Basilio.  Hablamos de Proust...
[We talked about Eça de Queirós; we said that we wished there were more of Eça's books; that everything he wrote was enjoyable; that he was far superior to his "masters," superior to Anatole France and superior even to Flaubert.  Borges has a moment of doubt when I mention Flaubert; then he says that Madame Bovary is a much lesser work than Cousin Basilio.  We talked about Proust...]
(Adolfo Bioy Casares, Borges, Barcelona: Ediciones Destino, 2006, 133)
*****
Proust not being Portuguese, the follow-up anecdote in the sequence had to be pruned from this post.  Tsk, tsk.  However, even with something like 1,500 pages still to go, I can still assure you that Bioy Casares' diary is filled with juicy literary goodness of this nature as well as the delicious personal dirt that I was hoping to find--as in the story about the crazy ex-flame of Borges' who used to boast of being a big Don Quixote fan but would then qualify it with comments like "pero el verdadero, no el que todos leen" ["but the real one--not the one that everybody reads"] (55)!
Publicadas por Richard a la/s 13:04