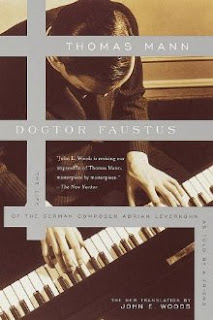 Doctor Faustus, a German novel written in sunny southern California exile but with the grim presence of World War II serving as the aging Mann's strumpet muse, is a sort of unholy trinity: part intellectual pseudo-biography exploring the link between creativity and madness, part Faust rewrite involving a composer who may have sold his soul to the devil in exchange for twenty-four years of uninterrupted artistic greatness, part political allegory of Germany's rise and fall in the period comprising the two world wars.  How does one manage to tell such a tale?  In the hands of narrator Dr. Serenus Zeitblom, Ph.D., a lifelong friend of the composer Adrian Leverkühn, the answer seems simple enough: a biography/memoir.  It's clear from the outset, though, that this won't just be any ordinary biography as the scholarly Zeitblom here moves from a childhood reminiscence about carefree kids eating berries in the invigorating country air to drawing careful attention to the way that art and fate fought it out in Leverkühn's later life:

I am moved to look back not out of nostalgia, but for his sake and at the thought of his fate, which ordained that he ascend from that valley of innocence to inhospitable, indeed terrifying heights.  His was an artist's life; and because it was granted to me, an ordinary man, to view it from so close-up, all the feelings of my soul for human life and fate have coalesced around this exceptional form of human existence.  For me, thanks to my friendship with Adrian, the artist's life functions as the paradigm for how fate shapes all our lives, as the classic example of how we are deeply moved by what we call becoming, development, destiny--and it probably is so in reality, too.  For although his whole life long the artist may remain nearer, if not to say, more faithful to his childhood than the man who specializes in practical reality, although one can say that, unlike the latter, he abides in the dreamlike, purely human, and playful state of the child, nevertheless the artist's journey from those pristine early years to the late, unforeseen stages of his development is endlessly longer, wilder, stranger--and more disturbing for those who watch--than that of the everyday person, for whom the thought that he, too, was once a child is cause for not half so many tears...  I urgently request the reader, by the way, to credit what I have said here with such feeling to my authorial account and not to believe it represents Leverkühn's thoughts.  I am an old-fashioned man, stuck in certain romantic views dear to me, among which is the heightened drama of an antithesis between the artist and the bourgeois (27-28).

I've quoted from this passage at length both because it provides a representative sample of the narrator's voice and a measure of the gripping, philosophical way aesthetics and inspiration are engaged with as a matter of course in this work.  Leverkühn's life as a man of genius separates him from the pack artistically and socially, but his good friend Serenus is aware of the price that he's had to pay as the result of a life devoted to his music.  Is the tradeoff worth it to advance his craft?  While fellow Doctor Faustus readers will have to judge for themselves, Mann ups the metaphysical ante in Chapter XXV when the narrator introduces a "secret manuscript" bearing "Adrian's unmediated voice" (237).  The subject?  A purported dialogue between the composer and the Devil in which extravagant claims are debated at a feverish pitch that may anticipate the title character's looming mental illness and subsequent breakdown: "The artist is the brother of the felon and the madman" (252).  "What is art today?  A pilgrimage upon a road of peas" (254).  "Parody.  It might be merry if in its aristocratic nihilism it were not so very woebegone" (257).  "Psychology--merciful God, you still hold with that?  It is but a poor, bourgeois, nineteenth century thing!" (264).

Although the shaken Zeitblom--perhaps himself an admirer of that "poor, bourgeois, nineteenth century thing" in his role as a middle class traditionalist/scholar trying to understand the human psyche--resumes his narrator role for the rest of the work, his biography is increasingly marked by the way Leverkühn's downfall-in-progress mirrors Germany's turbulent war years.  Confronted with his old friend's guilt over a war caused by German aggression, for example, Leverkühn manically opines: "Germany has broad shoulders.  And who would deny that such a real breakthrough is worth what the meek world calls a crime!"  (325)  Later, while working on the score for an apocalyptic work to be performed under the title of The Lamentation of Dr. Faustus, the obsessive composer prompts this reflection on the nature of German Kultur from a friend who has seen one man's road to madness parallel a nation's:

Meanwhile a transatlantic general has the inhabitants of Weimar file past the crematoria of their local concentration camp and declares (should one say, unjustly?) that they, citizens who went about their business in seeming honesty and tried to know nothing, though at times the wind blew the stench of burned human flesh up their noses--declares that they share in the guilt for these horrors that are now laid bare and to which he forces them to direct their eyes.  Let them look--I shall look with them, in my mind's eye I let myself be jostled along in those same apathetic, or perhaps shuddering, lines.  Our thick-walled torture chamber, into which Germany was transformed by a vile regime of conspirators sworn to nihilism from the very start, has been burst open, and our ignominy lies naked before the eyes of the world, of foreign commissions, to whom these incredible scenes are displayed on all sides now and who report home that the hideousness of what they have seen exceeds anything the human imagination can conceive.  I repeat, our ignominy.  For is it mere hypochondria to tell oneself that all that is German--even German intellect, German thought, the German word--shares in the disgrace of these revelations and is plunged into profoundest doubt?  Is it morbid contrition to ask oneself the question: How can "Germany," whichever of its forms it may be allowed to take in the future, so much as open its mouth again to speak of mankind's concerns?  (505-506)

A profound and arresting work not least for grappling with these sorts of questions so soon after the war and from the vantage point of a justly defeated people in the narrator's eyes.  The fatherland, c'est moi, is it not?  (www.vintagebooks.com) 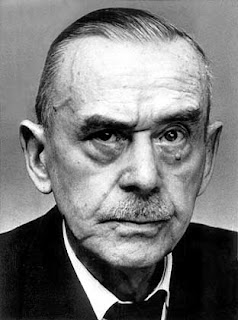 Destiny--or at least a happy coincidence--led me to read Doctor Faustus in conjunction with the German Literature Month program that's now underway here and here.  Thanks to Sergio Pitol, whose specific raves about the novel in El arte de la fuga (Mexico, 1996) first led me to become interested in the work, and to Anthony and Caroline and Isabella for more general blogger motivation to check Mann out for the first time.
Publicadas por Richard a la/s 03:45