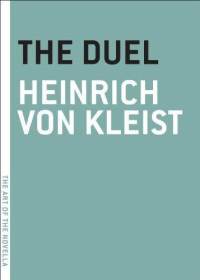 Apparently I need to deepen my acquaintance with the smash hits of German literature.  Superb long short story/short novella which, in addition to providing an easy way to pad one's reading statistics for the year, dares to investigate the question of whether God's will is at all fathomable to mere mortals.  That in itself would be unexceptional, of course, but even godless bloggers will have to admire Kleist's audaciousness in advancing his theme--spinning a spare page-turner of a tale in which a duel pitting one Count Jakob Rotbart, a fourteenth century ladies' man accused of killing his brother the duke but who has a seemingly airtight alibi predicated on the claim that he was otherwise busy seducing an aristocratic woman on the night in question, against Sir Friedrich von Trota, the murdered duke's chamberlain and a valiant defender of the disgraced Lady Littegarde von Auerstein's honor after her denial of Rotbart's claims goes unbelieved even by her immediate family in the wake of overwhelming evidence to the contrary, will reveal God's "infallible verdict" in a trial by combat that's binding by law.  That the answers provided by the duel can be seen to reflect poorly on God's judgement, man's interpretation of same, the value of honor, innocence, true justice, and mercy, or any and all of the above is just one example of Kleist's slippery winning ways, but I won't dwell on the primal ambiguities since I'm led to believe that most bloggers want only simple solace and maybe a costume drama/retro vibe outta their goddamn historical fictions.  While there's little of those things here, on an entirely unrelated note I'm tickled by the fact that the 19th century icon Kleist, at least in the promo photo below, is probably the first author to be featured on this blog who could ever be mistaken for a band member in one of the mid-1980s incarnations of the Fall or the Psychocandy-era Jesus and Mary Chain.  Yes! (www.mhpbooks.com)